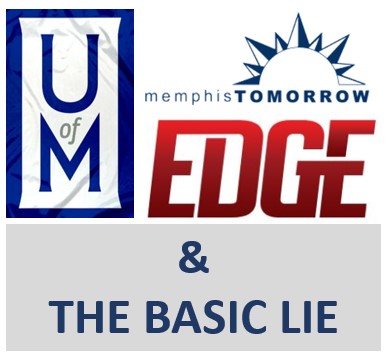 The basic lie that we all learn not to do in Kindergarten underwrites the Memphis decline. Beyond acceptable common puffing or hyperbole, lying, decpetion and gross misrepresentation routinely occurs with for example the better tomorrow promised by Memphis Tomorrow or the EDGE Scorecard. The EDGE Scorecard is nothing more than a platform designed to justify excessive corporate/real estate incentives for the benefit of the small few while EDGE takes in fee revenue.

And sadly, lying is institutionally  enabled by the local press, legislative bodies and in partnership with the University of Memphis of all places. It would seem that the Memphis community could depend on the UofM to use their vast resources to speak up for a community in need to drive economic development. But as an EDGE partner, lying is enabled by the UofM, through a lack of measurement and voice, further creating a platform for exacerbating community imbalances.  But, oddly, lying seems to persist even when unneeded.

The recent Bluff City Law project, a winning project, is an example of EDGE lying when its entirely unnecessary. First, a $1.4M abatement makes sense in attracting the local production of a national network series. All that is needed to make the project inviting is a 2-3x benefit of $2.8 – 4.2m in tax revenue generated which would translate into a $100-150M economic impact.

But EDGE is estimating a $1.7B economic impact from 10 episodes of Bluff City Law. Why the lie? The series of Nashville is often used as a best practice reference. Using the statistics for Visit Music City, the average visitor spends about $500 when visiting Nashville. Based on that stat, $1.7B in economic impact from Bluff City would translate into 3.4M in additional visitors to Memphis based on 10 episodes of Bluff City Law. Are you freakin kidding me ?!?! Lets do some math below. 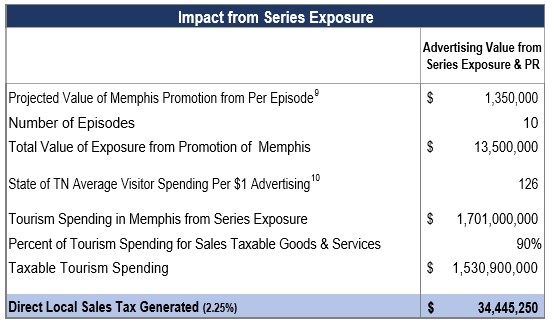 Referencing  Visit Music City, since 2012, when 124 episodes of Nashville started production, there have been 3.7M more visitors come to Nashville. If all the credit for Music City tourism increases are generously given for The Nashville series, that would translate into approximately 30,000 per episode or 300,000 for 10 episodes.

So applying the same math for Bluff City Law, 300,000 x $500 per visitor equals $150M. $150M in economic impact x 3% tax revenue factor equals $4.5M. Here’s the message a $150M economic impact and $4.5M or somewhat less tax revenue generated works for the Bluff City $1.4M abatement. Why lie ??? And why not use a more relevant best practice reference in the project summary like the commonly referenced Nashville  ?

Bluff City Law is a great win. Why muck it up with a big fat lie ? Because lying is the foundational basis of a leadership complex that routinely feeds on a Memphis community in need. Kinda like the lie of  North MS and East Arkansas being top Memphis economic development competitors.

How can a City evolve and compete in a global economy while being institutionally disconnected from reality ? It can’t. Institutional lying starts at the top of the Memphis ecosystem paving the way for exacerbating imbalances in Memphis where a lack of basic values in telling the truth, advocacy and oversight have culturally normed decline over 20 years…..