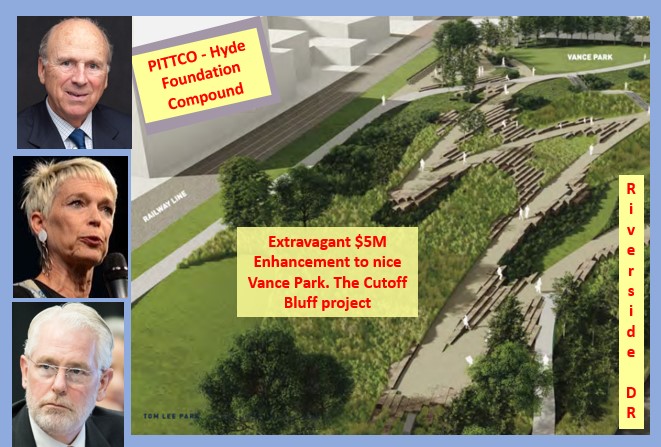 Some time ago, before Carol Coletta said that every community is entitled to a “glamour project”, I adopted that belief, and for the most part, accepted the Riverfront boondoggle. I did publicly object to a County Commission appropriation of $3M due to the fact that the resolution contained no deliverables.

At any rate, that has now changed after I have learned more. For starters, the recent reduction of parking, promised in City mediation, is concerning. Memphis Riverfront Parks Partnership (MRPP) claims to have the authority to modify a City mediated parking agreement. But after seeing various entities get access to local funding and then dramatically modify the deliverables, I believe opponents of MRPP on the Riverside parking matter.

And then there is the extravagant $5M Cut Back Bluff project that was sold by the Downtown Memphis Commission’s Downtown Mobility Authority (DMA) and  JenJen Oswalt, to local legislative bodies, under the heading of a $62M public parking project. The $62M project included the public endorsement of AutoZone’s Bill Rhodes.

Again, I had not been focused on the Riverfront boondoggle. But from the presentation materials of the $62M DMC PILOT extension fund project, I was always wondering what was going on with the Wagner Place project that added 35 parking spaces for $6M.

That’s $171K per parking space, with above ground parking garage spaces costing $25-30K per space. So I wondered, are they putting all of the Wagner spaces under ground or what? Then I referred back to the DMC Commission presentation materials and this is what I discovered. 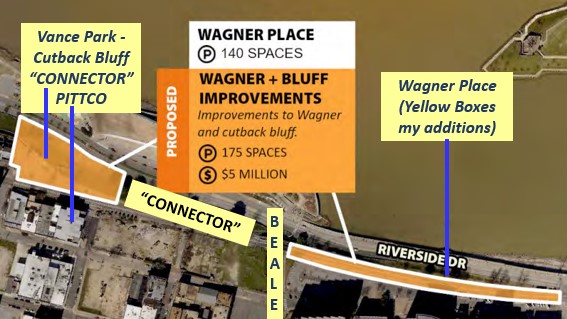 First, even with $6M in DMA parking funds,  the Cutback Bluff project has nothing to do with  automobile parking. Its an extravagant Vance Park enhancement project bordering Pitt Hyde’s downtown compound. (Refer to the above graphics, when reading the following).

This $6M in local funds, comes in addition to $30M in state and local funds for Riverfront development. Vance Park was a beautiful park before hand, with stairs to the river. But the park is being redeveloped under the name of Cutback Bluff. The project extends Tom Lee Park’s current boundaries by engulfing Vance Park as Cutback Bluff.

The language used in the  legislation to enable access to $6M of $62M in parking funds was parking “connectors” from Riverside and Tom Lee Park to DMA parking. The connector is an extravagant landscaped switchback sidewalk being built, on the bluff of the once Vance Park, to connect a sidewalk at the top of the bluff to Wagner place parking. Cutback Bluff itself does not generate direct parking revenue for the DMA.

In fact,  parking is being removed at the bottom of the hill on the east side of Riverside Drive in apparent violation of the City mediation agreement. As far as the top of the bluff, a cost effective connector, could have been, connecting Wagner Place parking to an unimproved Vance Park. But Nooooo,  the elitists have to gig the taxpayer, for another $6M to fund extravagant landscape improvements bordering the PITTCO compound.

Given the DMA’s local funding, they have the potential to be a local game changing board by investing in true economic development. The DMA should curtail the mobility center and recover $6M from MRPP for Cutback Bluff. Or if not the former, curtailing the Brooks Museum by $6M for Cutback Bluff. This will result in about $70-80M in taxpayer savings to be redirected to targeted economic development investments. 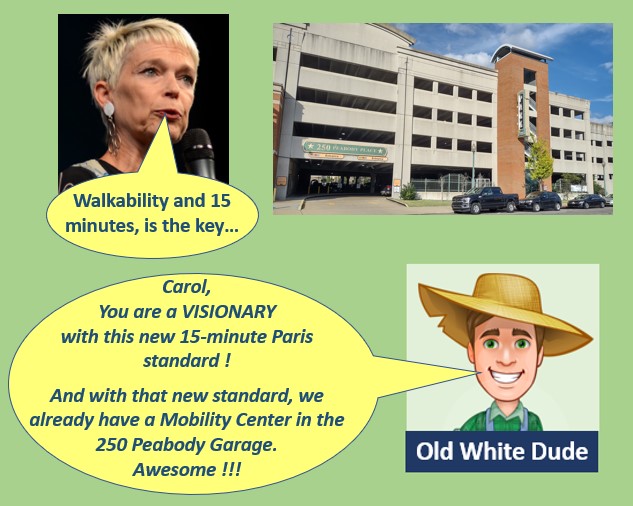 Memphis Riverfront Parks Partnership’s (MRPP) Carol Coletta recently articulated a new “Paris” standard. And that standard is 15 minutes walking or by bike to meet one’s daily needs. Given that standard, and with a virtually an empty 250 Peabody Place garage, during peak 11am-1pm weekday time,  much of the planned Downtown public parking garage expenditures need to be curtailed.

As evidenced in the Downtown Parking Study, before COVID, Downtown public parking is plentiful. Curtailing the Downtown Mobility Center and Wagner Place projects will save taxpayers $70-80M over 25 years. After all, we already have a mobility center at 250 Peabody Place with bike racks and electric charging stations.

Additionally, all of the much less expensive than garage to build, promised MRPP curbside parking, per mediation agreement, needs to be built, on both sides of Riverside. This will help maximize public riverfront access, use and investment.

Recently, the Downtown Memphis Commission released their 2021 year end financials and my observational conclusion of a virtually empty 250 Peabody Place Garage was confirmed, with the garage generating $209K in revenue and a $869K cash loss. 250 Peabody Place has approximately 1,000 available spaces which, at $10 per day, results in annual revenue potential of $3.6M. This means the occupancy rate of 250 Peabody Place sits at about 6%.

The improved financials, that operationally breaks out each garage, were produced by DMC’s Penelope Springer under the new DMC leadership of Paul Young. See page 10 of the financials:

Significant opportunities exist to improve public economic development return on investment. And per the TN Attorney General’s opinion, that is often locally cited as the authoritative legal source on PILOT Extension Fund use (PEF), the PEF can fund virtually anything related to economic development, to include needed workforce development.

Given this flexibility, the DMC’s Downtown Mobility Authority and Paul Young have the opportunity to be heroes on the local economic development front with $70-80M, in away from parking garages, targeted economic development investments. But what about walkability and the Paris standard? 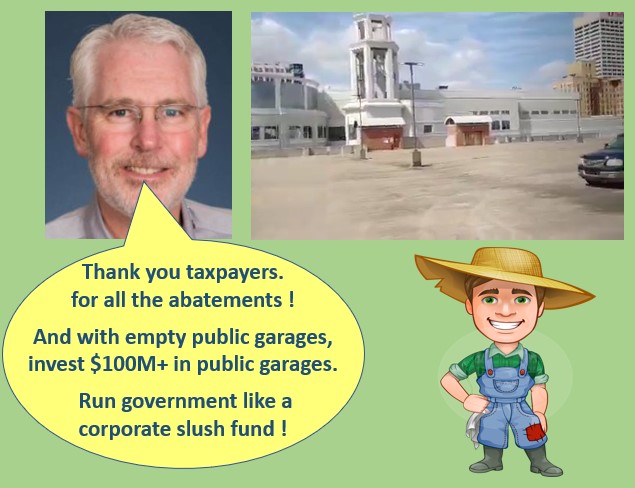 What’s weird is everyone is talking about walkability, but no one wants anyone to walk. The former, while spending $100M on public garages, with empty garages and plenty of parking during peak time. If the Carlisles need a garage, they should build it; not the taxpayers after all of the lavish incentives provided to the Hyatt/One Beale Development.

So given Coletta’s Paris standard, as an old fat white dude, while not jaywalking at all, I clocked my walking time to various locations around Downtown. Keep in mind, the Paris standard is 15 minutes walking or by bike. Here are my pleasant walking times, from the virtually empty 250 Peabody Place garage during peak time:

Given the Paris standard, empty garages and plentiful parking, there is no need to spend $100M on public parking garages. But there is a big need for targeted economic development.

Let’s get started, with the new and improved DMC under Paul Young….

Using the PILOT Extension Fund, the Downtown Memphis Commission makes loans, for effectively private parking garage construction, at below market rates. This table attempts to reveal the effective grant amount when the below market loan terms are compared to commercially available terms.

The conclusion here is that Memphis Shelby taxpayers have granted development groups, involving Orgel, Hyde and Carlisle $17M for private garage construction. As if that were not enough, these loans are coupled with multiyear tax abatements on associated developed property. 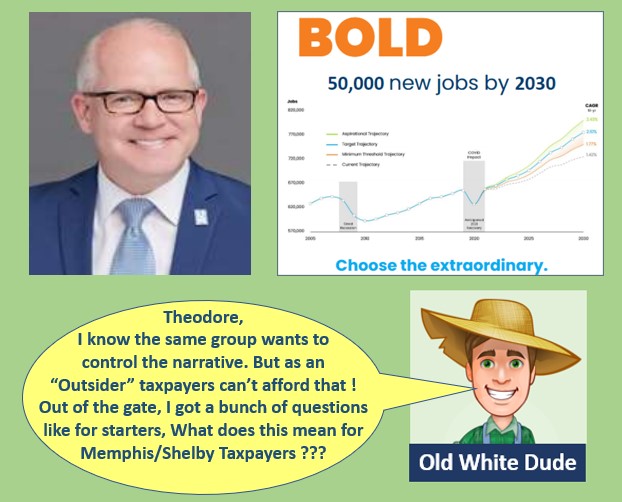 Per a Daily Memphian article, Ted Townsend says, “The days of Memphis letting outsiders dictate its narrative are over. I’m here to tell you that ends today.”

As a taxpayer advocate and frequent critic of the Chamber and local public private complex, I was struct by the use of the word “outsider” in the article. Is taxpayer advocacy viewed as work of “outsider” forces ?

Probably so. After all, the local public private complex freezes up when questions arise centered around taxpayer justice. With that, questions arise after reading the first release of MemMeasures, an inaugural publication of the Chamber’s Center for Economic Competitiveness (CFEC).

After being unable to validate historic employment numbers from the Bureau of Labor and Statistics (BLS) for the chart containing the “BOLD” 50,000 job projection, these are my questions: 1) What is the Greater Memphis Region? 2) What are advanced industries? and 3) What does such a BOLD prediction mean for taxpayers?

I presume the CFEC wants folks to read the MemMeasures report, but one would not know it based on the inability to download or print the report, from the difficult to read from, issuu platform. In the interim, without clarity on some of the above, we will take a shot at concerns, per the report. 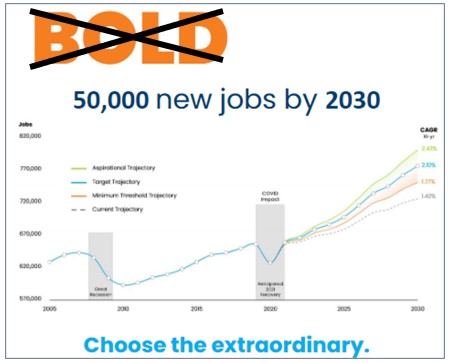 As far as the local narrative goes, the Chamber gang does control the narrative in the traditional media. Think about it. When is the last time you have seen press reporting or an editorial in opposition to the Chamber? Thought diversity is sorely missing from the local discourse.

“Outsiders” has to be local public dissent coming from non-traditional channels. Regardless of the Chamber’s “Protest to Prosperity” platform, which would seem to welcome public dissent, the Chamber gang appears to want to squash credible public dissent. After all, they have never experienced such dissent. Its foreign to them and they can’t handle it. But lets’ dig deeper into MemMeasures:

At any rate, employment growth for the Memphis MSA was 59K from 2010-19. So a 50K projection, for a yet to be defined Greater Memphis Region, is not BOLD.

What does it mean for Memphis/Shelby taxpayers? This is a question that the Chamber runs from. With the Chamber entrenched in favor of current excessive EDGE/DMC tax incentive policy, actually it will likely be more of the same for taxpayers. Currently, Shelby County represents approximately 80% of the employment of the Memphis MSA. So given the 50K Greater Memphis Region projection, 40K would be the Shelby County 10 yr projection.

Historically, 40K jobs over 10 yrs, would equate to below average percentage growth, for Shelby County, when compared to the new Chamber selected 10 member peer group.  And deficient growth has also been historically compounded in a very high price for Shelby County taxpayers, with community disinvestment from excessive tax incentives, appearing to have manifested itself in lost legislative seats. So, not good for taxpayers.

New voices, regularly scheduled and heard in public chambers, builds needed thought diversity and provides the vitality to support pro-business growth and real economic development. Its a bad plan to allow any chamber to hog the discourse on public economic development and even worse, if its the Greater Memphis Chamber.

In the end, taxpayer justice that serves taxpayers today, as advanced through taxpayer advocacy, is the best public economic development. This former is a departure from a Chamber public-private narrative, that serves the small few today, while using an old playbook, that overamplifies the future for a majority Black community in need…..