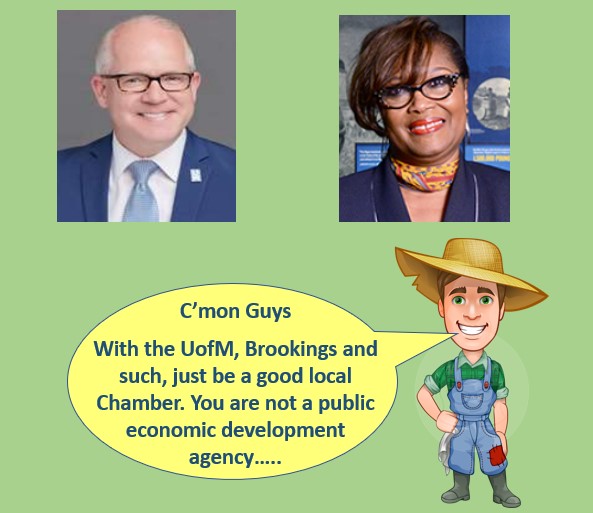 The Greater Memphis Chamber of Commerce (GMC) should just focus on being a good Chamber, which they have not done. Evidence of the Chamber’s historic failure, can be found in deficient small business establishments to power the local economy. Shelby County has 23 business establishments per 1K population, compared to an average of 33 for its newly established 10 member peer group (BLS).

Without public checks and balances, the GMC policy stack has historically favored corporations and real estate developers. For this reason, small business, the primary driver of regional economic growth, throughout the United States, have been been thwarted in Memphis. This thwarting has predictably led to deficient economic development outcomes, as defined by total wage growth.

Meanwhile, with the launch of yet another GMC initiative in the Center for Economic Competitiveness the GMC appears to be attempting to be something that it’s not,  a public economic development agency. Chambers generally perform the function of business policy and development advocacy, while focusing on marketing data in support of local business investment. This business advocacy is needed in the discourse but should not be confused with or stifle the discussion on economic development.

For example, the last 2014 Brookings FOCUS Economic Development plan involved the above parties, yet the publicly funded plan was never measured. And after 2 years, preceded by 4 years from other local entities, the GMC Upskill 901 initiative has failed to produce a connected workforce development plan.

Public County officials should secure their own publicly funded economic development measurement resources, while engaging the GMC and its data on matters of what Chambers are tasked to do, business policy advocacy. This breeds, what is arguably most lacking in the local discourse to support economic growth, thought diversity and vitality.

Since small business is the chief driver of economic growth, the GMC should focus mostly on  helping small business thrive, not stifling them. In this way and from the recent past, the GMC would have done the following:

All of this to say, there is plenty of work to go around. To best insure regional economic progress, the GMC should, as a community stakeholder, focus on business policy advocacy, while leaving public economic development to others. 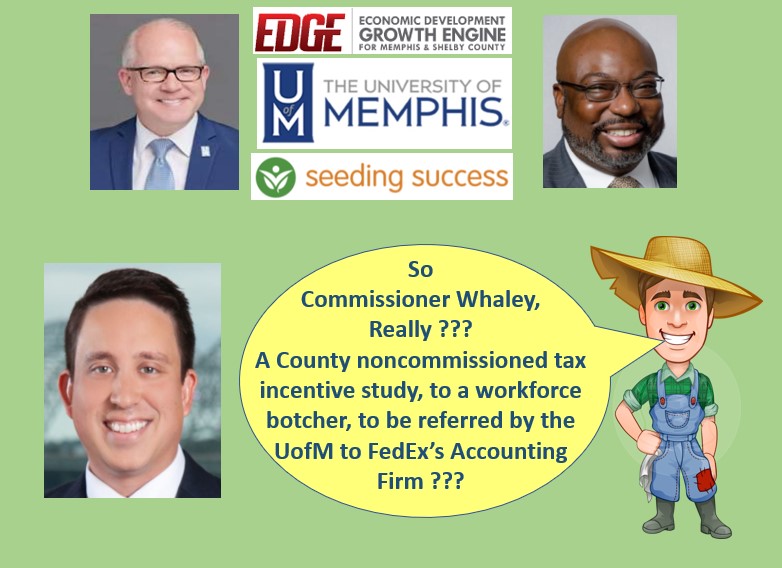 Instead of sponsoring a County administered tax incentive study, Commissioner Michael Whaley is sponsoring attaching such critical public work, to the elitist Memphis public private complex. Under the Whaley proposal, the work is to be done under the public-private umbrella of Seeding Success.

No one really seems to know much about the expansive mission of Seeding Success. What we do know is that Seeding Success, with an army of people working there, first started promoting Pre-K. Then they expanded from Pre-K thru post-secondary education.

Since that expansion, with no plan, Seeding Success has sat and watched the local botching and sacrificing of the workforce development system to the Nashville based State Cartel on Ripping Education (SCORE Board) in Shelby County.

To make matters more conflicting, Al Bright, Chairman of the EDGE Board and Blair Taylor, CEO of Memphis Tomorrow both sit on the Seeding Success Board. Memphis Tomorrow is where much of the Memphis agenda for elitist decline has originated. Under the Whaley proposal, Seeding Success would follow The University of Memphis recommendation to have the study conducted by FedEx’s corporate accounting firm, Ernest and Young (E&Y). FedEx is a disgusting pig on the civic stage.

It’s sad that the public University of Memphis cannot conduct the study, since surrendering their university economic development thought leadership to the Greater Memphis Chamber and disemboweling their School of Economics.

But more sad is that Whaley has chosen to trample on, arguably more locally informed, referenced and participatory research on the matter, while following UofM counsel on the matter. This is a typical elitist move to dismiss the local taxpaying public on the matter, while exporting such work off to New York and celebrating a public private failure in Seeding Success.

The missed opportunity here is that there are well informed and researched positions on both sides of the tax incentive matter, from which local legislators can make policy decisions. After all, those that might conduct the E&Y research likely have never been to a local legislative or EDGE meeting. Having participated in local meetings, is more than critical, as it provides anecdotal insight to oversight and local procedure.

Meanwhile, the Chamber and UofM’s Ted Townsend continue to promote the status quo on tax incentives while reporting declining results.

Not Connecting the Dots: History and Chamber Pipeline 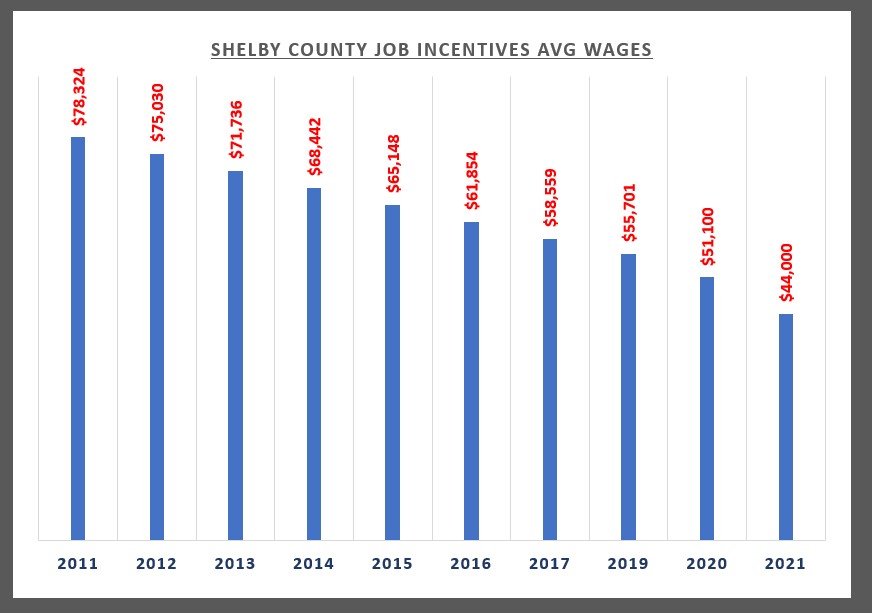 Unfortunately, Whaley either cannot or is unwilling to connect the dots when proposing solutions. One would think that Whaley would be up to speed with local public testimony by Chamber/UofM Ted Townsend before taking an economic development recommendation from the UofM.

Here is some history, contained in the table above and informed with this legislative package from April, 2021. From 2011 to 2019, prior to Townsend, the average annual wage for job incentives dropped from $78K to $56K.

With incented average wage drops from $78K to $44K, this represents a public economic development implosion, with wages projected to crater from incented projects by 43% from 2011. So why would Whaley take a recommendation from the UofM ? Not connecting the dots…….