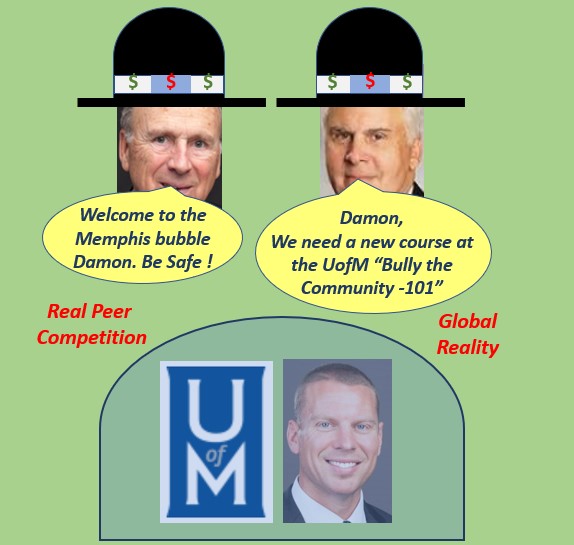 Memphis doesn’t have money for public transit due to highly deficient corporate community leadership. The FedEx/Memphis Tomorrow complex is down in every category over 20 years while using federal, state and local tax dollars.

A Memphis community in need, has been bullied from the top of the ecosystem with excessive corporate/real estate incentives and botched workforce development efforts over 5 years while further trapping people into poverty with inadequate transit. This has resulted in below average total wage growth,  $300M+ in deficient community investments since 2010 and $75M in recurring tax revenue shortfalls. This is why Memphis/Shelby does not have funding for transit.

Unfortunately, if Dr. Damon Fleming, the new Dean of the Fogelman College of Business, wanted to determine the source of inadequate tax revenues to address community transit needs, he would not be able to find out from UofM researchers. After the previous blog, that included an open letter to meet with Dr. Fleming, The Memphis Economy published a rather unhelpful blog in communicating the effectiveness of  Memphis/Shelby economic development efforts without any reference to peer competitors.

The below chart is sourced from BLS QCEW. The low employment growth rate is due in large part to a botched disconnected workforce development system over 5 years and culturally stifled small business sector that has occurred in a closed economic development system while corporate/real estate policy interests have been prioritized. 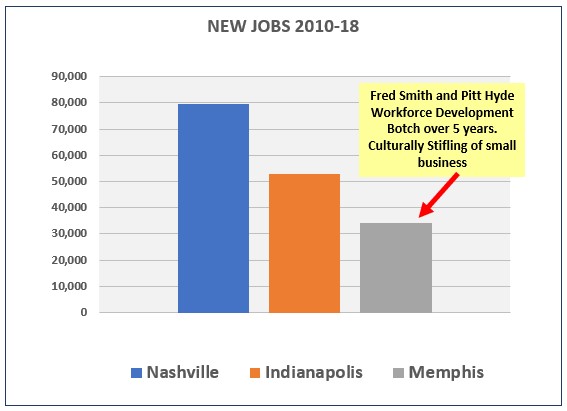 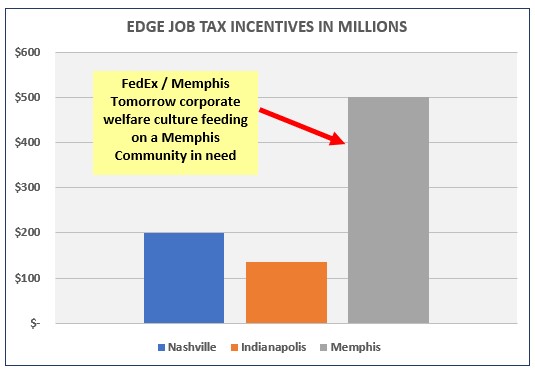 Documents actual cost per job as realized in the local economy. Both Nashville and Indianapolis are at about $2.5K per job while Memphis/Shelby is at $14.5K.  A strict analysis would reveal a $400M job tax incentives excess. 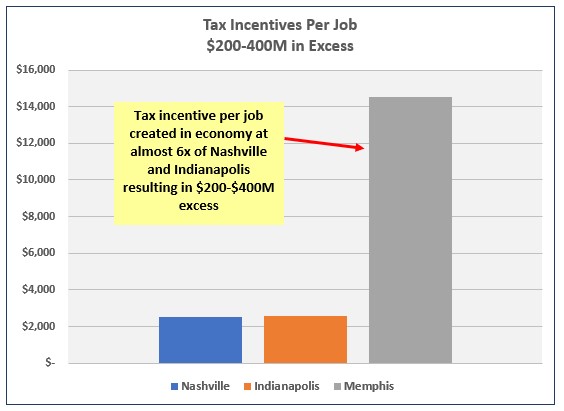 Its rather concerning that 3 years after funding was identified as the chief obstacle to adequate transit, none of the organizations that you would think would be concerned about the issue have proposed a funding solution. Examples of such organizations include Bus Riders Union, NAACP, NCRM, Memphis Tomorrow, Innovate Memphis, Greater Memphis Chamber, MICAH or the University of Memphis.

Here are some solutions with many of these sourced from Smart City’s recent blog. The need is $30M for adequate public transit. 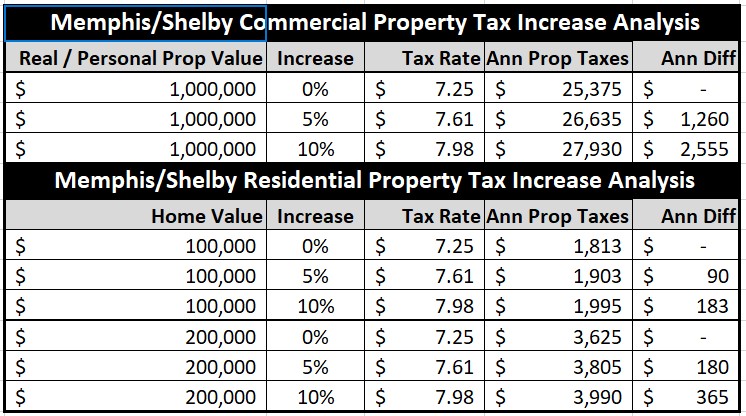 Vehicle Registration Fee – $10M  There is the possibility of adding a fee to all vehicles in Shelby County. With about 700,000 vehicles, a $13 per car fee would generate the same amount of money. This is the antithesis of progressive taxation, but it would spread the pain and likely limit the political blowback. Or, the fee for each car could be staggered with an escalating scale for more cars but certainly topping out much lower than $145.

Gas Tax – Referendum $6M State law give Memphis the authority to enact its own one-cent gas tax. It would cost the average driver a moderate amount stretched over an entire year and produce as much as $6 million a year. This requires approval at referendum. While it’s not an option for county government, it’s a potential funding source.

Parking Tax– ??? Some cities, including Chicago, San Francisco, Austin, Pittsburgh, and Seattle, have taxed parking spaces based on the market rate for free parking. This not only raises more money for MATA but it could encourage more riders to use transit.

Fee on MLGW bills – ??? A fee could be added on utility bills for property owners which would be similar to the stormwater utility fee. While this could raise the amount targeted by county government, another fee on the lengthening list of fees on MLGW bills seems a volatile political option.

Adequate Facilities Taxes. Inconsistent Revenue. Over the past 20 years, these taxes have surfaced several times when county government needed revenues. It’s also known as development taxes because It’s paid on the square footage of development and is normally 50 cents to $2 per gross square foot.  These taxes are progressive since they are based on square footage. Shelby County Government abandoned previous proposals for the tax when developers howled. More to the point, development varies from year to year, so it’s impossible to depend on a specific amount.

The imbalances are huge while the vitality to solve Memphis community problems has not materialized. Memphis is a product of corporate socialism which can only be corrected with aggressive course correction away from the dreadful FedEx/Memphis Tomorrow rigged system policy framework.