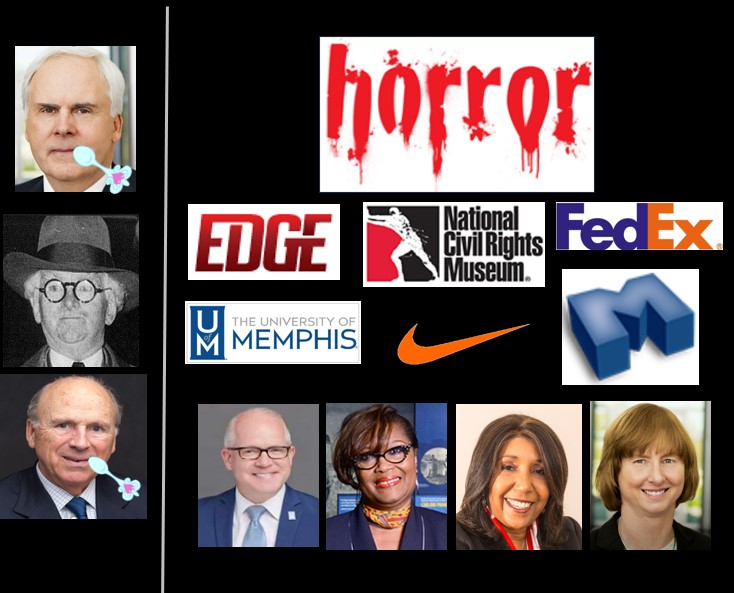 An impressive historical attraction, the National Civil Rights Museum (NCRM) was established in 1991. But what about the local movement? There really isn’t one for improving the quality of life for a majority Black Memphis community in need.

Meanwhile, the seemingly overamplified Memphis social justice effort, that drowns out pursuits for example, around taxpayer justice, focuses on police reform and symbolic endeavors like moving statues and changing street names. In this way, police get, not part but all of the blame for societal ills.

With high Black poverty levels and sluggish median household income growth, for there to be no critical examination of economic policy, seems to be an Elitist design for decline. Its a design that affords an exhaustive and public critical evaluation of police, while looking the other way as excessive corporate/real estate incentives roar for the benefit of the small few.

Anyway, in 2008, I did some work in Raleigh, NC. It was a different world than Memphis. Focused on the customer taxpayer, Raleigh just seemed to be a diverse community working to make things better for all. Race was hardly an issue there and it certainly was not part of almost every public discussion.

And on another note, I spoke to an old friend, not long ago, that moved from Memphis to Desoto County, MS. He said, “Memphis is archaic. It seems caught in the past. Sure race comes up here in Desoto County from time to time but its far from a focal point.” All that to say, the City of Raleigh, per the 5 year Census averages, has an 18.6% Black poverty rate and Desoto County, MS. 11.6%. 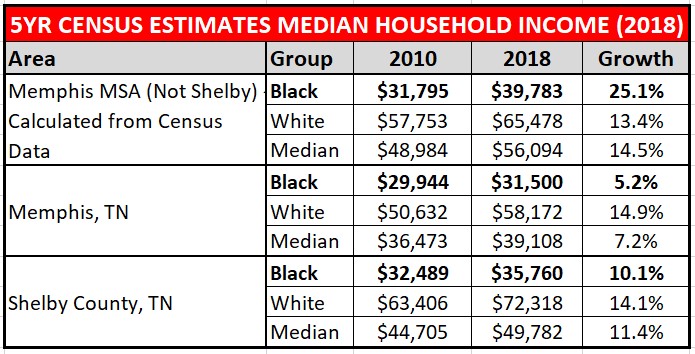 As shown in the above table, Memphis MSA Counties outside Shelby County had increased Black median household incomes of 25.1%  from 2010-18 compared to 5.2% for Memphis and 10.1% for Shelby County. The MSA outside Shelby percentage gain is weighted by county population, to be a collective percentage growth for all of the MSA counties outside of Shelby. Individual county growth can be seen in the table at the end of this blog.

This blog could care less about race. But it does care about taxpayers. And in a majority Black community in need, increasing Black household income is paramount to improving the quality of life for all in Memphis and Shelby County.

But sadly, in a horrific hijacking by the elitists, the Memphis social justice movement, is far removed from a quality of life focus, while looking the other way on matters of economic development policy and compliance. Taxpayer justice advocacy by this blog, and not social justice,  is why Nike raised their wages recently resulting in approximately $5M in annual wage increases while not costing Memphis/Shelby taxpayers a penny more.

Without taxpayer justice, there will be no social justice. Forget it. And nobody systemically botches their workforce development system. NOBODY ! 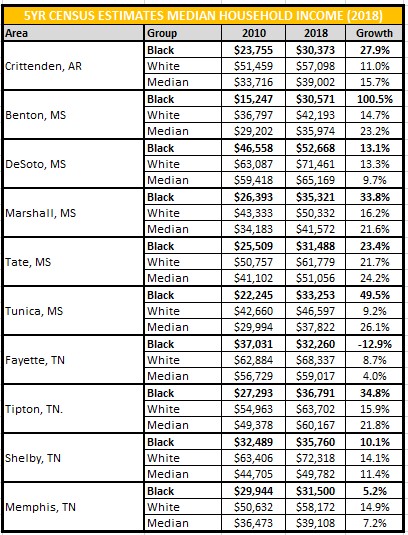