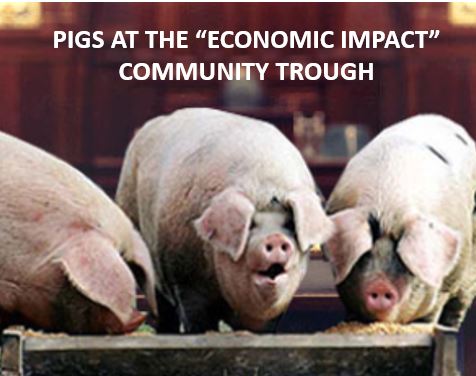 What is the economic impact of investing tax dollars in the community as opposed to warehouse jobs ? The EDGE Board doesn’t seem to care. The above question comes and is answered in this article in response to Councilman Martavius Jones concerns regarding excessive tax abatements approved by the Economic Development Growth Engine (EDGE) Board as covered in the Memphis Business Journal. Jones is one of the the few local legislators that has professionally resided outside of Memphis. This gives Jones unique insight to ask questions that things are not adding up in Memphis when compared to other cities.

The first question that should be asked is “Is there a need to incentivize 30 warehousing jobs at all?” Probably not. But if so, some boundaries need to be set for abating EXISTING commercial property taxes for NEW jobs. Based on the analysis in this article, the EDGE Board left an estimated $850K, at a minimum on the table, at its most recent meeting based on the application of a minimum and proven community investment 1.24 benefit/cost ratio. And if the most recent study of the Economic Institute regarding warehousing jobs was applied, the $850K left on the table would jump to $1.35M.

The objective of this article is to encourage the establishment of a benefit/cost ratio to inform smart and balanced economic development investments that support the implementation of the Amazon Road Map published by The Memphis Economy of The University of Memphis. The analysis in this article is for a new job expansion PILOTs while abating EXISTING taxes. Retention PILOTs, which abate existing taxes against existing jobs while requiring a different analysis,  should be ended altogether.

Community disinvestment continues in Memphis within a unique municipal decline by design framework which Jones questions. Last Wednesday, the EDGE Board called a special meeting to stick it to the taxpayer by voting to abate EXISTING local tax dollars for 30 brewing company warehouse jobs. This vote comes on the heels of local concerns regarding EDGE and economic development policy. In short, the Board vote supports the argument for a new EDGE Board that follows below peer average total wage growth, neglected workforce development efforts, tanking small business vitality and a lack of site availability.

The tax abatement, otherwise known as a payment-in-lieu of taxes (PILOT), appears to be more of a real estate than an economic development deal. PILOT acceptance results in a paying tenant for the warehouse owner. The $2.3M abatement yields projected tax proceeds of $1.8M resulting in a $500K loss for Memphis/Shelby taxpayers and a .79 benefit/cost ratio according to the EDGE PILOT Project Summary. This project summary does not apply the more rigorous requirements found in the Economic Institute study previously mentioned or the analysis that results in a 1.24 benefit/cost ratio found in this article.

This discussion in this section is not designed to be right per se but to discourage community disinvestment and the establishment of a community investment benefit/cost ratio to inform smart economic development incentive policy with regard to abating EXISTING taxes for NEW Jobs.

Using available public data sources, a $50K police officer can be shown to increase tax proceeds $55K+ per year based on increased property values due to decreasing violent crime. And this analysis argues that a $50K school counselor with a caseload of 100 will increase total student wages by $500K per year with a 2.3 economic multiplier applied to increased wages. The 2.3 factor serves as an approximate average economic impact multiplier across the local economy for investments in education. A 3.76% local tax income rate is used against increased wages based on the rate derived from page 2 of the EDGE Project Summary.

And $776,000 of commercial property tax proceeds or 26K per worker in PILOT commercial property tax income is accounted for in this analysis by redistributing those proceeds across the working student population at a 10% rate to account for increased commercial demand for investments in education and resulting higher wages. This results on an annual basis to be $26,000 per 100 students or $260 per student based on the following calculation ($26,000 / 10 yr term) x 10% = $260. Given these assumptions, the following calculations are derived:

The result of this analysis is a 1.24 benefit/cost ratio. With the further use of multipliers against commercial property the ratio can jump to a 1.58 benefit/cost ratio. Again the purpose this section is not to be right but to encourage a quantitative context to the conversation and the establishment of a benefit/cost ratio for community investment while informing smart economic development incentives for workforce development, public transit, small business development, pad ready site development and recruitment. The analysis models economic benefits of community investment that result in increased property values, commercial demand and wages.

Typically this blog supports new job PILOTs but not this PILOT. To achieve a 1.24 benefit/cost ratio, the EDGE Board would have needed to reduce the incentive from $2,325,744 to $1,474,016 which represents approximately $850K or 37% in excess abatement. This does not apply the more rigorous standards of the Economic Institute study for warehousing jobs which would have resulted in a $1.35M reduction.

In practice, per Martavius Jones concerns in the MBJ of providing everyone a 75% abatement, a more restrained 47% abatement would have worked for both the taxpayer and this real estate deal labeled “economic development”. But instead, the EDGE Board robotically plowed forward with a 75% taxpayer losing abatement for warehousing jobs.

Get real folks. Boundaries are needed in the abatement of existing taxes while ending retention PILOTs. A new EDGE Board is needed. The disconnected EDGE Board continues offering taxpayer losing and excessive incentives, without restraint, in the face of growing local concerns……

With a special focus on Memphis Tomorrow, MCCL Measured is the first ever and exclusive tool to attempt to measure the effectiveness of Memphis Corporate Community Leadership efforts that use taxpayer money. The site is designed to facilitate financial literacy education regarding taxpayer funded initiatives. Additional videos and resources can be found by browsing the entire site or at http://mcclmeasured.net/resources . Please email questions to jkent@pathtrek.net