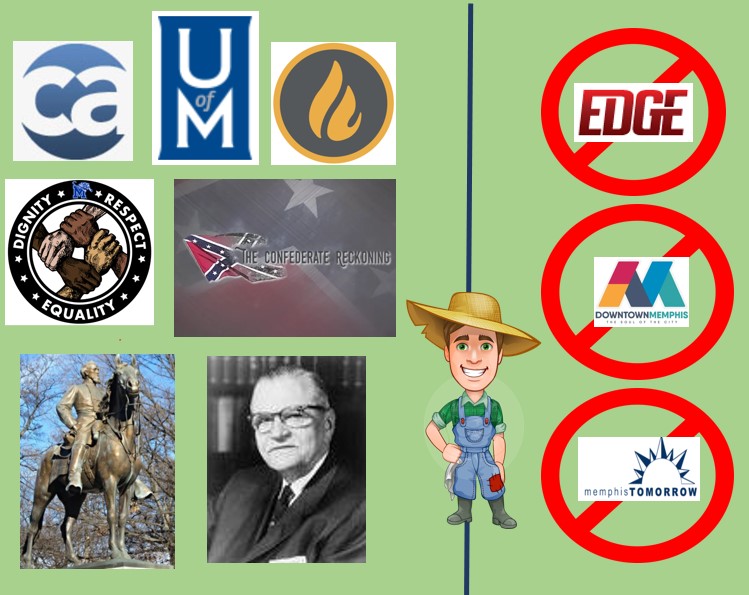 Does anyone find all of the historical social justice investigation of almost 100 years ago a bit much ? After all, such investigation occurs, as present day taxpayer injustice, on the back of a Memphis majority Black community in need, goes entirely uninvestigated by the local Memphis press.

At best, given trends and events, current social justice historical press investigation is an over resourced effort. At worst, its an active elitist conspiracy, to distract the public away from what is most important in addressing social justice, and that is taxpayer justice.

There are numerous examples. But take for example the recent exhaustive investigation of almost 100 years ago, of the late Clifford Davis, only to provide a rationale for renaming the Federal building.  The over resourced effort was the work of the joke Daily Memphian / University of Memphis (UofM) Institute of Public Service Reporting’s “investigative” partnership.

Meanwhile, the UofM Board of Trustees gets press for rolling out civil rights logos and renaming buildings for late social justice activists. Stunningly, the former comes on the heels of the UofM supporting the excessive $15M Poplar Plaza tax incentive, that used press unreported bogus EDGE financial justification, while losing taxpayers, in a majority Black community in need, $2M in existing taxes.

And its no surprise, with no investigation of the elitist Memphis Tomorrow complex, that no one really knows what the Downtown Memphis Commission (DMC) PILOT Extension Fund really is, as a $62M consideration comes down the pike. To find out, this would only involve, merely, a 30 year historical investigation. But such investigation fails to occur.

With that said and sparse available public documentation, this blog is going to take a shot at investigating the DMC PILOT Extension Fund (PEF) and figuring it out. 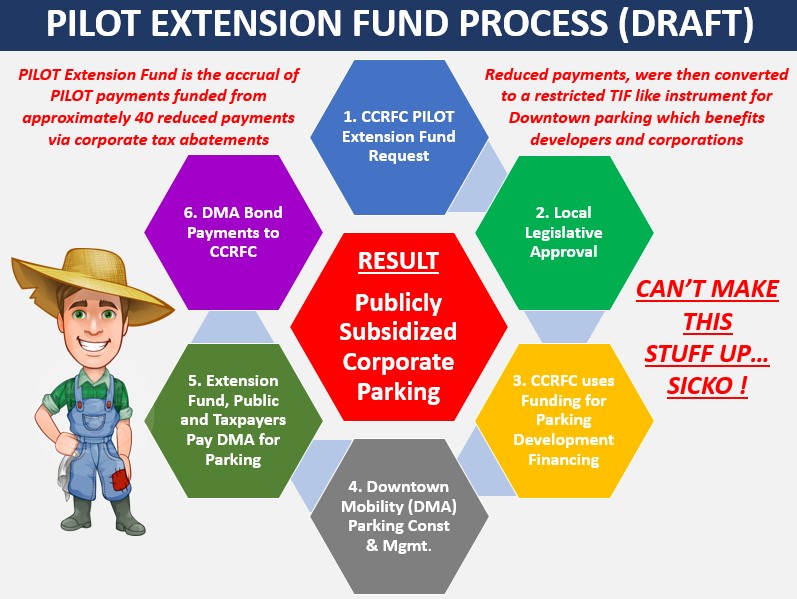 First, with little authoritative technical documentation, this is a draft of the DMC PILOT Extension Fund (PEF) process. The above was constructed based on helpful information obtained, via email, from the DMC. This process may be edited once more documentation is obtained from the DMC and/or local governmental bodies.

Given the fact, that a $62M PEF funding measure is set to be voted on by the County Commission on Monday, this blog felt it imperative to get, at least a process draft published, in an attempt to have an informed consideration of the $62M measure. This because, like me,  it appears several Commissioners lack basic PEF understanding.

Based on a preliminary review, the PEF was established approximately 30 years ago to fund downtown public parking and economic development. It appears corporations and developers stand to greatly benefit from this public parking subsidy.

40 PILOTs were extended in the late 1990s and FedEx joined just recently, to fund the PEF, while corporate PILOT beneficiaries enjoy, on average, extended term 85% real property tax abatements. Additionally, it appears the approximate 15% PILOT payment was used to create, yet another incentive, through a restricted TIF like fund for public parking development.

Assuming this process is correct, these are questions for DMC regarding the Commission’s consideration of the $62M PEF measure:

Assuming a $47M loan based on a $15M current PEF balance (DMC Testimony), if borrowed today, total payments would be $80M over 40 years with a 3% interest rate. Using Trustee documentation and the 41 PILOT payments and term lengths, the PEF will generate an estimated $16M over the next 25 years. That represents a deficit of $64M. Perhaps those figures are not correct, so to the DMC: