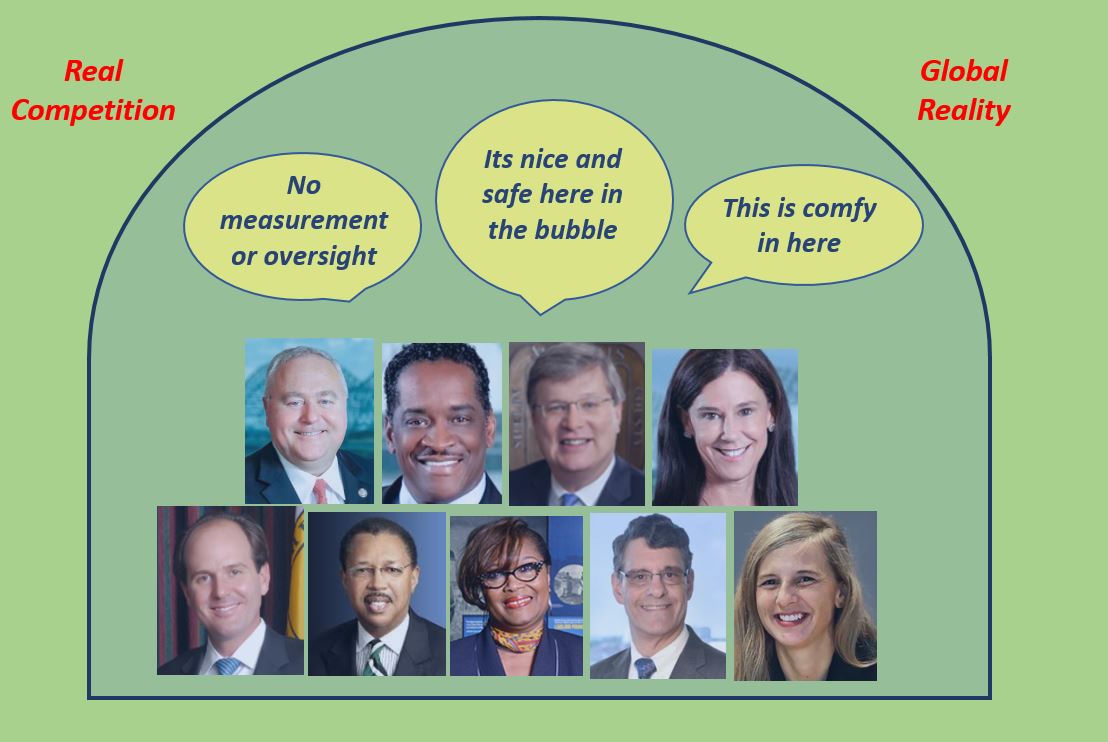 Living within a sheltered bubble, the establishment keeps its resident Memphis population ignorant, while protecting the closed ruling social construct from scrutiny. This involves institutional support from a non-investigative press, rigged legislative bodies and university community impotence. This is why Memphis lacks the vitality to grow.

Local educated leaders seem ignorant to evolution as community decline has become culturally normed. Instead, local leaders knowing nothing else, see the Memphis economic development establishment complex as “visionary” in their competition with bordering communities in a global economy.

The Memphis decline is fundamentally built on the following: 1) no measurement 2) botched implementation and 3) lacking legislative and press oversight. For example in 2016, after Mayor Strickland announced the local ACT WorkKeys initiative to support career readiness workforce development, implementation just did not occur. Below is a map that shows surrounding counties in gold having implemented and achieved their ACT Workready communities goals. But not Memphis. Memphis, for whatever reason, mistakes announcements and conferences for implementation with the support of lacking measurement and oversight.

Its little wonder, living in the bubble without measurement, that local leaders are ignorant to the fact that Shelby County is 20,000 filled jobs below the peer average since 2010 where a botched workforce development system and failed implementation are just part of a decline by design ecosystem. But this botched state of affairs is normal in Memphis, where after 20 years, the educated Memphis community knows nothing else.

Away From Ignorance: Career Ready Using a Data Driven Approach

So what is career ready for a job that pays a good wage? After five years local leaders don’t know. The State of Tennessee is trying to help define that with their Ready Graduate Early Post-secondary Opportunity (EPSO) programming. Ready Graduate measurement deems a student ready for post-secondary life based on a collection of academic milestones, industry certifications and/or standardized test measurement such as ACT, ACT WorkKeys and Armed Services Vocational Aptitude Battery (ASVAB). Sometimes this collection practice is called stacking credentials. And with the newly introduced Junior Achievement program, perhaps local legislators might want to consider adding Junior Achievement to its State Legislative agenda for inclusion in the Ready Graduate EPSO measurement scale.

With the above and employer demand in mind, while using Jobs4TN projections, below are some data driven observations of what career ready looks like in the Greater Memphis area with regard to educational and occupationally aligned skill attainment. Here’s the good news, with a high school equivalency, industry certification and a ACT Workeys National Career Readiness Certificate (NCRC), students coming out of high school meet the prerequisite educational attainment and skills requirement for 69% of the projected job openings that pay an average wage above $43K while incurring no college debt. And furthermore, they can continue their education as they work to obtain their Associate degree while incurring no college debt which will quality them for more job openings and higher wages.

As communities throughout the country battle aging populations, workforce development can become the economic engine while leveraging the youthful population of Memphis. And for youth, going to work early, soon after high school and making a good wage, while incurring no college debt is a great career start. Of course, to make the big bucks, career pathways can go beyond an Associate degree to include Bachelor’s, Master’s  and Post Master’s Degrees. See below data sets.

Most of the work with this data set had do to with defining occupations that required more than a high school equivalency but less than an Associate degree. An example would be a commercial truck driver that requires a post-secondary award but less than an Associate degree. Additionally, all manufacturing jobs in this analysis were assigned a minimal certification requirement. Given this analysis, 71% of the projected Greater Memphis job openings in 2026 will require something more than a high school equivalency educational attainment while paying an average 2018 wage of $36K and up. 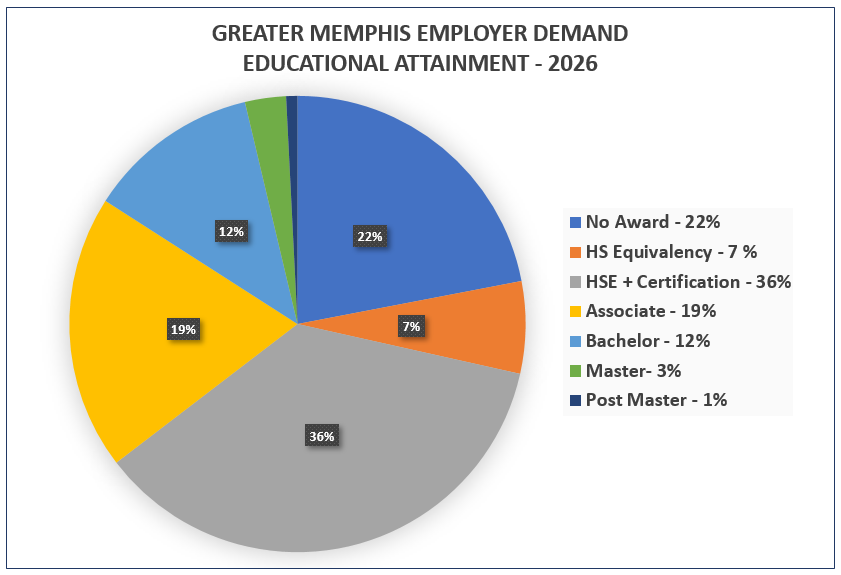 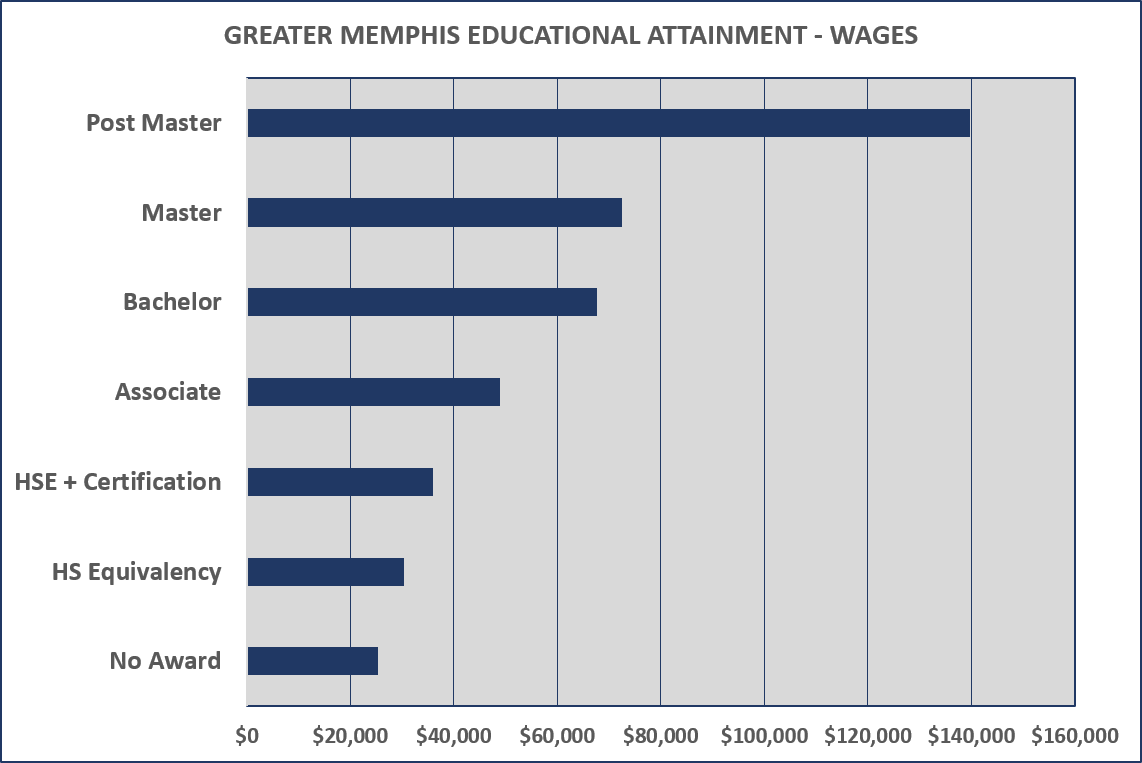 Examples of standardized test that align to occupational skill readiness are ASVAB for military occupations and ACT WorkKeys for civilian occupations. Both of these assessments are recognized in the State of Tennessee Ready Graduate program. The below data reveals that an individual has the pre-requisite skills in Applied Math, Reading for Information and Graphic Literacy with a Silver NCRC to qualify for 76% of the projected 2026 job openings that pay an average 2018 wage of $43K and above. 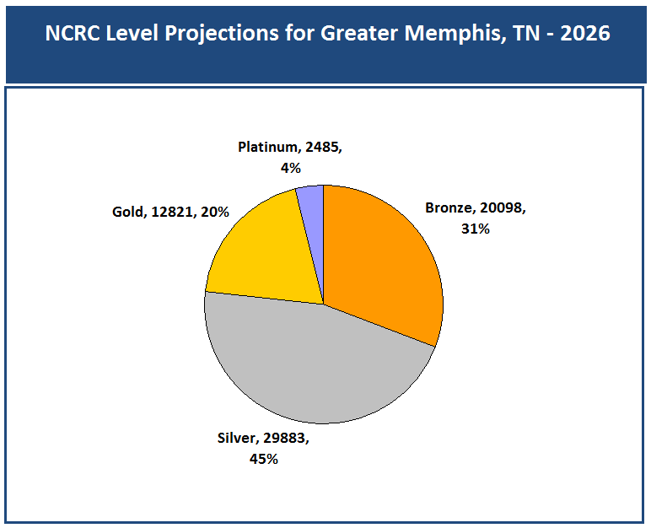 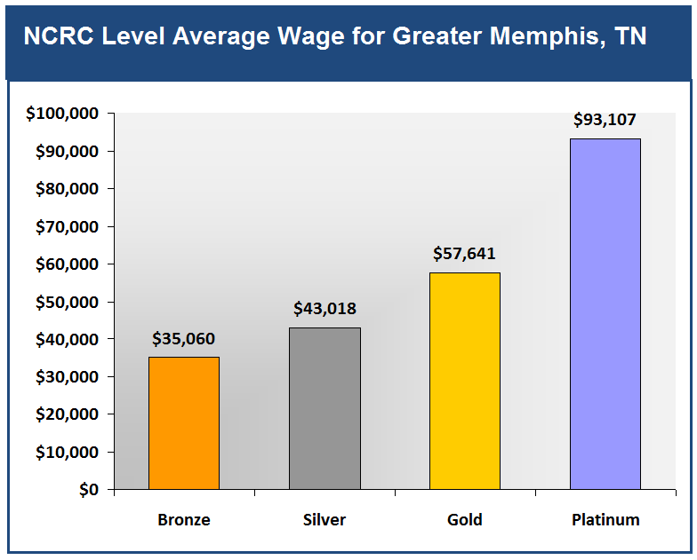 Career ready, based on Greater Memphis employer demand for a job that pays a good wage is a high school equivalency, certification and a ACT Silver NCRC ideally accompanied with a completed career plan.

For Memphis to progress forward, it will need to compete in the global economy where implementation, measurement, oversight and workforce development take center stage away from the rigged practices of the past. Without the former, Memphis will fall further behind in the global economy.