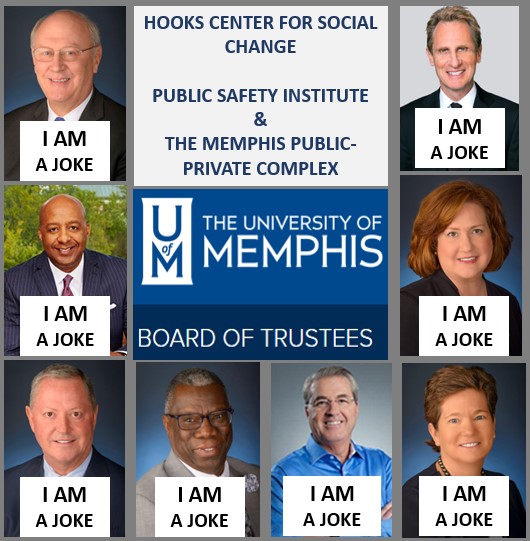 Stunning was recently to see, the entire Memphis Tomorrow public private complex trot out in local press opinion, to offer no specific public policy recommendations in the wake of the horrific George Floyd murder. Much less than police defunding, local police reforms, such as CLERB with subpoena power, have been on the table for some time. Why doesn’t someone from the UofM and/or The Memphis Tomorrow public private complex tee that up ?

Instead, as an example, the U of M Hooks Center for Social Change comes out with a Daily Memphian opinion piece that looked like a middle school social studies lesson. Without any specific policy recommendation, the piece stressed the following: 1) Learn with an open mind, 2) Grow where you are planted, 3) Donate, 4) Vote, 5) Meet with your elected officials and 6) Prepare for a marathon, not a sprint. This #6 is one that the stone age, backwards and elitist Memphis Tomorrow really likes. With their vast resources to do so, they just starve everyone into submission and as a result nothing ever changes in Memphis.

And based on a Daily Memphian piece, when it comes to the availability of compiled data, to support conversations on police reforms, there is none ! This comes with the caveat, of a host of publicly funded public safety organizations that should already have data at their finger tips. These organizations include CLERB, The Memphis Crime Commission and the UofM Public Safety Institute.

It was also reported by the Commercial Appeal, that any of the resolutions being considered by the City Council would need the Mayor’s administration support. With respect to data, this could unfortunately involve, the Memphis Tomorrow CEO organization. After all, on their website, Memphis Tomorrow takes credit for City / County data systems to support performance management.

Concerns on this blog come from someone that hates to see middle class police pitted against working class citizens while police seemingly get blamed for all of society’s ills. But with all of these publicly funded public safety agencies, the data should already be available to support a conversation around opportunities to improve policing. Don’t you think ???

The wholly unmeasured Memphis Tomorrow public-private complex, which includes The University of Memphis, moves as a big publicly funded blob. They speak in platitudes, while not advocating specific policy positions or producing the needed data to inform honest conversations around social change.

In fact, the University of Memphis, while in partnership with EDGE, completely dismantled their economic development measurement platform housed at the UofM’s Memphis Economy project that compared Memphis to its peers.  No reason was given for the data platform dismantling and subsequent public obstruction.

Sadly, its just a fact.  Under the new local UofM Board of Trustees, there has been no policy advocacy for social change or economic transformation. Instead, the UofM is routinely seen lobbying in legislative chambers for tax incentives or grants for themselves. The former robs the Memphis community of independent and needed public university thought leadership to drive social change.

The Memphis public-private complex moves as a blob with many of the same Memphis Tomorrow entities represented on local boards. Everybody “stays in their lane”, which really sucks for the community, while local “advocacy” organizations don’t independently publicly raise questions or check one another. Its just a big unmeasured publicly funded and elitist blob that feeds on a majority black community in need.

All of the above occurs while public measurement systems are in shambles, costing taxpayers in a majority black community in need millions, as excessive tax incentives for the small few roar.