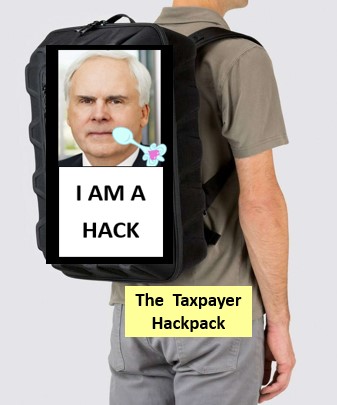 Implementation of Fred Smith’s public policy vision for America is that of runaway elitism resulting in stagnation, broken promisies and growing income inequality. After all, that is what has materialized in Memphis after 20 years of the FedEx/Memphis Tomorrow CEO organization policy implementation under Smith and Pitt Hyde. Taxpayers in Memphis and throughout the country, unknowingly, wake up and carry the elitist hack Smith around on their back all day long. Smith is a national embarrassment on the public policy front.

Just look at policy implementation in the last couple of years where Smith went to Washington to lobby for corporate tax cuts during an economic expansion. With increasing Federal debt levels, the corporate tax cut paves the way for the increased likelihood that Americans, promised otherwise, will probably be paying much more for Medicare in their retirement years.

And following the Federal tax cut, Smith then runs back to Memphis and bullies a local Memphis community in need out of $39M in excessive local incentives – without any published economic impact justification – all while botching the workforce development system over 5 years and shutting out small business costing local business and taxpayers millions.

Misuses $1.7M in Depot funds that should have come back to the taxpayer for re-appropriation

Implements payment-in-lieu of taxes (PILOT) programming that does not even result in collecting minimum publicly approved PILOT payments in addition to the excessive abatement awards based on a review of the 2014-18 Shelby County Trustee reports.

And Smith wants to debate The New York Times in Washington DC ??? Whatever…. Smith doesn’t need to go to Washington DC for a debate. I will debate him anytime in Memphis, TN where he will subsequently be publicly destroyed.

First, EDGE Board approved job incentives can be shown to be $250M in excess. The tax incentive fiscal note impact (TIFNI) platform project proposes to fix excessive incentives while providing a centralized database for 13 abating boards by providing reliable economic and fiscal impact analysis with a fiscal note for every abatement. EDGE represents just one of those 13 abating boards.

But concerning, after receiving the benefit of an excessive EDGE abatements, corporate/ real estate beneficiaries are not even paying the publicly approved minimum payment. This is based on a review of Shelby County Trustee reports. Using the 2014-18 Shelby County Trustee Reports, a survey of 21 companies was conducted for PILOT contracts from 2014-18. The survey reveals the following:

Only $2.1M of $9.8M in PILOTs approved were billed for Shelby County real and personal property taxes resulting in a $7.7M shortfall for the 21 companies. The PILOTs $9.8M PILOTs approved due amount was calculated by multiplying the EDGE Board approved project summary “% of taxes paid” percentage (pg 5 and 7)  obtained from the EDGE website by the “Assmt Taxes” found in the 2014-18 Trustee’s reports to derive a PILOTs due amount for 2014-18. What might the shortfall be for all companies ?

Scheduled PILOTs totaled $16.5M compared to $9.8M. The $16.5M amount was derived by adding “taxes paid after abatement” for corresponding years 2014-18. Some shortage can naturally come about by a decreasing tax rate down from what was originally approved. But given the amount of difference, 1 of 2 issues seems to be occurring in 1) planned capital investments did not occur or 2) under assessment. Under assessment occurred with Electrolux as locally reported. See spreadsheet here.

The Trustee Report states the following: ” This report is generated to assist in fact–based discussions as to the effectiveness and future direction of Shelby County’s PILOT programs. The ultimate value of these  PILOT incentives should be measured by the PILOT boards and our local governments in terms of real economic impact to our community and the returns gleaned from these investments.”

But other than on the topic of delinquent PILOTs, report discussions never occur. In fact, the Shelby County Commission has never scheduled the review of all abating boards as was resolved in their EDGE Task Force work 1 year ago.

As was shown with this exercise, to evaluate what is happening with tax incentives, one must navigate between multiple sites in the Trustee and abating board sites, convert pdf documents to excel and perform calculations. Further, provided the documentation can be found, recalculations must be performed using responsible assumptions to derive defensible economic impact and then fiscal impact must be applied.

All of that to say both measurement and data problems exist in trying to evaluate return on taxpayer investment all while excessive corporate/real estate incentives roar for the benefit of the small few. Its an implementation of  anti-business corporate socialism. Memphis #1 problem is an implementation of corporate socialism of the type that undermines ecosystem investments that support commercial evolution and competitive economic growth for all.

Its a national embarrassment and a design for ecosystem decline under Smith, Hyde and the FedEx/Memphis Tomorrow cartel…..