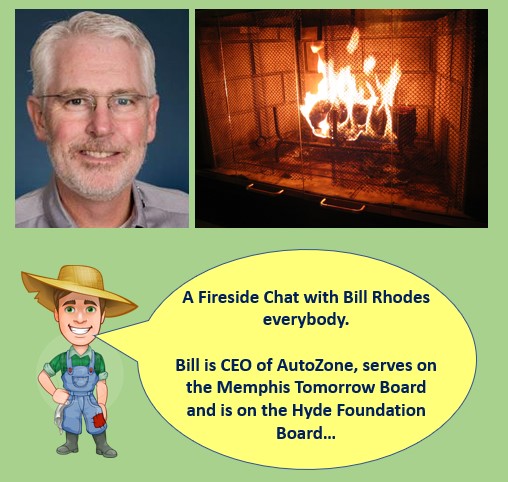 On Wednesday, AutoZone went in and got an increase on their already excessive EDGE abatement from $11M to $13M while reducing the net taxpayer benefit from $3M to $2M. When fiscal impact analysis is imposed, the projected abatement return on investment for taxpayers is –17.4%.

AutoZone is led by Bill Rhodes who also sits on The Memphis Tomorrow and Hyde Foundation Boards. We decided to invite Bill for a fireside chat to which he hopes he accepts. Here are some advance questions:

Bill, in your private and public leadership positions, we hope that people such as yourself can see the nexus between an evolving publicly supported ecosystem and private profitability. What was the thought process at AutoZone to decrease the net taxpayer benefit of the AutoZone EDGE project from $3M to $2M in the midst of flat public revenues ?

Bill, did you know at a $9M abatement, the Memphis/Shelby taxpayer could have broke even at the end of the 15 year term? Do you see the public-private benefit of achieving at least taxpayer breakeven over a 15 year term with the AutoZone project ?

Bill, now we know our tax rates are high in Memphis. In Nashville, your abatement would have been about $3M. Double that for the high tax rate in Memphis and make it $6M and then kick in another $1M for Nashville being a hotter city and you have an abatement of $7M. Don’t you think $9M is business friendly while the taxpayer breaks even after 15 years ?

Bill, with the AutoZone project, we abated $1M in already existing property taxes. With flat local public tax revenues, does that really seem like it would help AutoZone profitability while risking the possibility that AutoZone growth might not be adequately publicly supported  ?

Bill, we abate 75% in taxes for existing companies. Where did that thinking come from ? It reeks of anti-business corporate socialism and elitism. What ever happened to the partnership concept of say 50% for an existing local corporation in AutoZone operating in a nationally low business cost environment in Memphis ?

Bill, so how did the Memphis Tomorrow CEO organization pull off being down in all categories over almost 20 years as their initiatives use Federal, State and Local taxpayer money?

Bill, what was the deal with the unmeasured Brookings FOCUS economic development plan that came out of the Memphis Tomorrow Fast Forward initiative and the botched workforce development effort over 5 years while excessive tax incentives roared for the benefit of corporate/real estate interests ? It seems to be a prescription for ecosystem decline. Is there another way this can be viewed ?

Anyway Bill, contact us if you would like to schedule the fireside chat. And here is the new fiscal note for the AutoZone project. 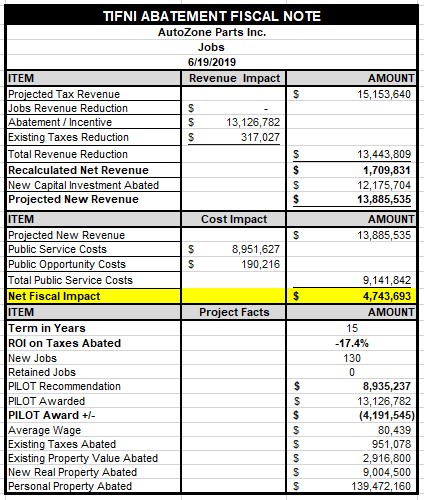