The EDGE Scandal results from a lack of fiscal impact analysis regarding some $500M+ in EDGE abatements over 8 years. EDGE has been referencing economic impact analysis to justify excessive corporate/real estate incentives which does not address the fiscal impact of abating taxes. According to the Bureau of Economic Analysis, that houses the Regional Input-Output Modeling System (RIMS) II used by EDGE, the RIMS II system cannot be used to conduct a complete fiscal impact analysis.

But in a rigged elitist Memphis system, this lacking accountability, as a matter of process, is just normal operating procedure. After almost 20 years, local leaders know nothing else under the rigged FedEx/Memphis Tomorrow system. The fact is that a fiscal note should accompany each tax abatement as a matter of process.

Unalarmed are such leaders as Kemp Conrad, Gerre Currie, Martavius Jones, Brandon Morrison, Edmund Ford and Mickell Lowery. All of these leaders have both academic and professional resumes that support competency in business and finance matters. But that expertise is being squandered in serving a Memphis community in need as excessive corporate/real estate incentives roar.

Jones has stated that it takes one full term to learn the job of a City Councilman. But it takes no time to be alarmed at gross fiscal process gaps ! Alarming, is the lack of alarm by local officials fluent in business and financial affairs.

Additionally, another major assumption concerns the per employee cost of locally funded public services that needs accounting for in a fiscal impact model while supporting the local economy. Arguments for this cost can range from $1,600 to $2,500 per employee to support the free enterprise system. If such costs are not accounted for, employers and the local community will not be adequately serviced resulting in the public’s diminished ability to serve the local economy while attracting new business investment.

Before this fiscal impact analysis, it was determined through peer city benchmarking that job incentives were as much as $400M in excess. The spreadsheet can be downloaded for public use and can accommodate varying assumptions in the blue shaded area. But for whatever reason, fundamental fiscal impact of excessive tax abatements was not addressed in City/County EDGE task forces. Wonder why ? 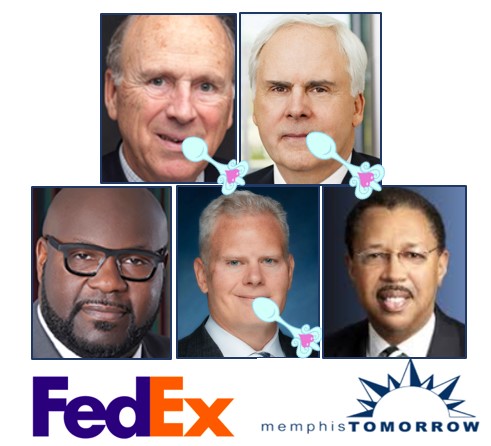 Councilman Berlin Boyd and Commissioner Willie Brooks, both employed by FedEx at the time, chaired the task forces. But there was no real EDGE reform. The EDGE Board was preserved in its current form while excessive incentives and botched workforce development efforts went unaddressed. It was a coverup of sorts resulting in a lack of course correction, a key indicator of a rigged system.

The only outcome was the creation of yet another “convening” economic development body called the Shelby County Regional Economic Alliance. So far, it has been a cheerleading group of sorts where almost 2 years since Richard Smith took over as Board Chair of the Greater Memphis Chamber, there is still no plan or measurable definition for economic development.

In the meantime, the entitled spooner elitists  continue to bully and feed on a Memphis community in need with excessive incentives without fiscal justification. In addition, to the excessive abatements, EDGE even misused some $1.7M in Depot funds that should have gone back to the taxpayer. The lack of fiscal impact analysis, as standard operating procedure over 8 years, proves an unchecked, entitled elitist spooner system bullying and feeding on a Memphis community in need. All of this occurs under the nationally embarrassing FedEx/Memphis Tomorrow corporate community leadership complex as a new poverty report shows increases in poverty.

So how to evaluate EDGE ? Well it starts with a fiscal impact analysis. Some local legislators seem to want to load up the evaluation with EDGE over performance. But that wouldn’t be fiscally conservative while not accounting for the business cycle. And how would the botching of the workforce development system and the loss of Electrolux, all under EDGE management, be accounted for ?

At any rate, the nationally embarrassing FedEx/Memphis Tomorrow complex, of which EDGE is a part, enjoys the support of lacking public university thought leadership, press and legislative oversight to confront elitist excesses that further irritate community imbalances. This has resulted in systems of decline being culturally engrained into the Memphis community leadership system. Rigging the system is seen as proficiency in evolving the ecosystem. But rigged systems don’t result in competitive economic growth; something Fred Smith must have missed in his history curriculum.

So, its more of the same in a design for ecosystem decline……