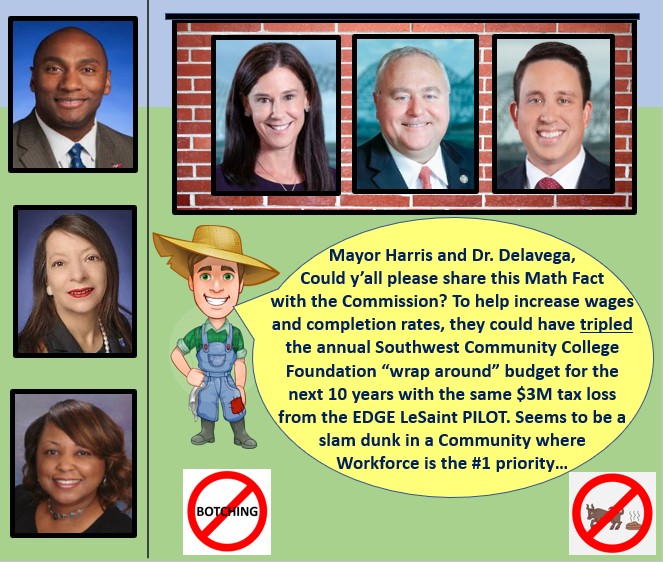 True story – In November, The Economic Development Growth Engine (EDGE) cartel member elected to  lose taxpayers $3M to incent low wage warehouse jobs. These are the very jobs the current Memphis Brookings Focus economic development plan  de-emphasized. So why incent the jobs ? Because the cartel does not operate within a framework of community accountability. In this case, the math fact and community cost is $3M that could have tripled the Southwest Community College “wrap around” Foundation budget for the next 10 years !

On Behind the Headlines, Dr. Tracy Hall, Southwest President, stated the current annual foundation budget is $150K and not enough to serve wrap around student needs for expenses like books that that go beyond tuition costs. Such investments in workforce could help boost low post-secondary completion rates while increasing wages – something Shelby County Mayor Lee Harris and Dr. Elena Delavega are both advocating. In a city where Workforce Development is the #1 priority, this should be a slam dunk but not under the Memphis Tomorrow cartel.

What’s even more alarming about the EDGE LeSaints approval, EDGE also oversees workforce in the Greater Memphis Alliance for a Competitive Workforce (GMACW). The EDGE/GMACW Board never meets thus dismissing workforce as an economic development strategy. In this way, the LeSaint approval is just typical as both EDGE and GMACW were birthed out of the Memphis Tomorrow decline by design cartel. So where is the legislative oversight ?

A chief enabler of local competitive ecosystem decline is the lack of independent public measurement of the public-private complex. Some local legislators seem to draw comfort in partnering with the likes of the Memphis Tomorrow. But while this may feel cozy and familiar, its functionally incoherent as local government has a different customer in the taxpayer than does Memphis Tomorrow in local CEOs. This view would apply to any local government and business organization which is not unique to Memphis. And besides, public measurement, when it comes to taxpayer funded initiatives is good for the business community.

But within the framework of economic development, as a consequence of this incoherence and without measurement tools, local legislators are not making the business case for increased investments in workforce to raise wages for the existing population. This is unfortunate as the only real economic development comes in the form of increasing wages for the existing population followed by recruiting new residents that make above average wages.

Given this, local government needs their own taxpayer aligned economic and workforce development plans along with a platform to measure taxpayer return on investment in public-private partnerships. This will help insure better public policy development and implementation of taxpayer funded initatives. To that extent, going back to the LeSaint Logistics PILOT that lost $3M for taxpayers, the below table articulates what an alterative economic development investment in workforce looks like.

Assuming a $300K annual investment over 10 years ($3M) in the Southwest CC Foundation fund and “wrap around” services, the below table assumes an increased 50% success rate for students in 1 and 2 year tracks resulting in a net increase in wages of $12.5K per student upon completion. 300 students get $1K per year with 150 increased completions per year.

This results in a net increase of $76M in annual local wages and $2.3M in annual tax revenues while delivering a 76% return for taxpayers over 10 years. And this analysis does not include the use of economic multipliers. Problem is local legislators are not making business case for workforce development. See below table:

Without independent public measurement, Memphis public-private partnerships will not be successful. Private interests measure the effectiveness of their investments based on their shareholders and customers. Public concerns in Memphis should do the same.

With respect to current public efforts, there is effectively no reliable measurement of public-private partnerships. This has resulted in cartel excesses, increased poverty and competitive decline of the Memphis ecosystem. For example, there is no centralized measurement platform for economic development incentives which can be shown to more than $250M in excess.

At the same time, there is an LOSB solution on the table to address the problem in the Tax Incentive Fiscal Note Impact (TIFNI) platform. The TIFNI solution provides a fiscal note for each tax incentive while providing a methodology for right sizing incentives based on projected taxpayer return on investment. Additionally, TIFNI centralizes all tax incentives in a central repository for cost effective administration.

Without effective public measurement and administration, public-private partnerships will result in continued ecosystem decline leaving the Memphis/Shelby taxpayer holding the bag for years to come…..