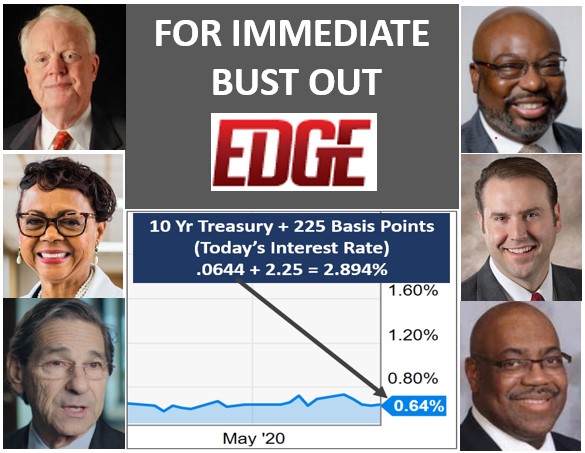 Further, this blog has written off Minority Women Business Enterprise (MWBE) and affordable housing programming as mere marketing to justify excessive incentives for corporate/real estate interests. Given the former and what will be disclosed in this blog, the 2601 Central Apartments payment-in-lieu of taxes (PILOT), should not be approved.

And if an incentive is approved, it should be no more than 25% abatement. Sadly, The Economic Development Growth Engine (EDGE) is stuck on 75% abatements for all and not financially incented to represent the taxpayer but instead to represent corporate/real estate interests.

In this case, EDGE will pocket $300K in fees for awarding a $5.2M residential incentive which is $5.2M more than a developer would be awarded in any other County in the State of TN. See the problem ? And the fee design results in EDGE using overly generous assumptions and bogus accounting to award excessive incentives. If the 2601 Central incentive is granted, EDGE will have approved more than more than $700M in abatement awards since 2011.

Problematic “But For” Assumptions

A -1.8% return on equity (ROE) without a PILOT and a 5.3% ROE with a 75% abatement is disclosed. The problem with the disclosure is that the disclosed ROE is for year 1 only, which is the lowest ROE over 15 years and does not average out ROE for the entire project. If returns, as shown in the application, are totaled for the entire project and averaged, the ROE is -.3% without and 7.2% with a PILOT. Disclosing lower projected ROE benefits, EDGE, the real estate developer in pursuit of a tax abatement and not the taxpayer.

The application uses a 5% interest rate. At the same time,  a bank letter in the application states that the permanent loan interest rate will be based on 10 year Treasury rate plus 225 basis points. As of Friday 5/16/20, the permanent loan rate would be 2.9%. Disclosing and assuming higher debt service costs from a higher interest rate benefits EDGE, the developer and not the taxpayer as it reduces ROE which further justifies the need for a tax abatement.

The loan term assumed a 25 year term and not a more traditional 30 year term. The other EDGE residential applications use a 30 year term. The shorter loan term increases annual debt service costs and reduces ROE. The former further justifies the need for a tax abatement.

The above findings results in several questions. What interest rate and term should be used ? And what about a cash out to reveal the developer’s projected financial benefit ?

“But For” Modeling Using Responsible Assumptions

“But for” analysis is used to justify public participation in economic development. It is derived from the clause “But for the incentive, the project supporting community economic development will not occur.” The tables above contain a “but for” analysis using more responsible assumptions derived from the proforma contained in the 2601 Central application. The analysis considers the mutual interest of the taxpayer and the developer in a “but for” return on equity (ROE) analysis.

Next, it is recommended that the more standard and traditional 30 year term should be used which has been the prevailing standard in other residential PILOT applications. Further, to get at the developer’s projected financial benefit, an 8 year cash out analysis is provided.

While rates and terms for multiple scenarios are disclosed above, the below findings will use a 4% rate which is higher and more generous to the developer than today’s rate of 2.9%. See below findings:

Cash out in 8 years without a PILOT, the annual average ROE is 15.8% and with a PILOT it is 23.1%. This calculation includes average annual operational and cash out ROE over 8 years.

All of the above supports rejection of the tax abatement for a prime real estate location or no more than a 25% abatement.

EDGE has not slowed down at all during the Coronavirus awarding excessive corporate/real estate incentives. And this comes at a time, when local government and an impoverished community is strapped for cash.

The solutions are the same as repeatedly recommended by this blog. Aggressive incentive reform is needed supported with publicly administered research based measurement to serve a majority black community in need…..