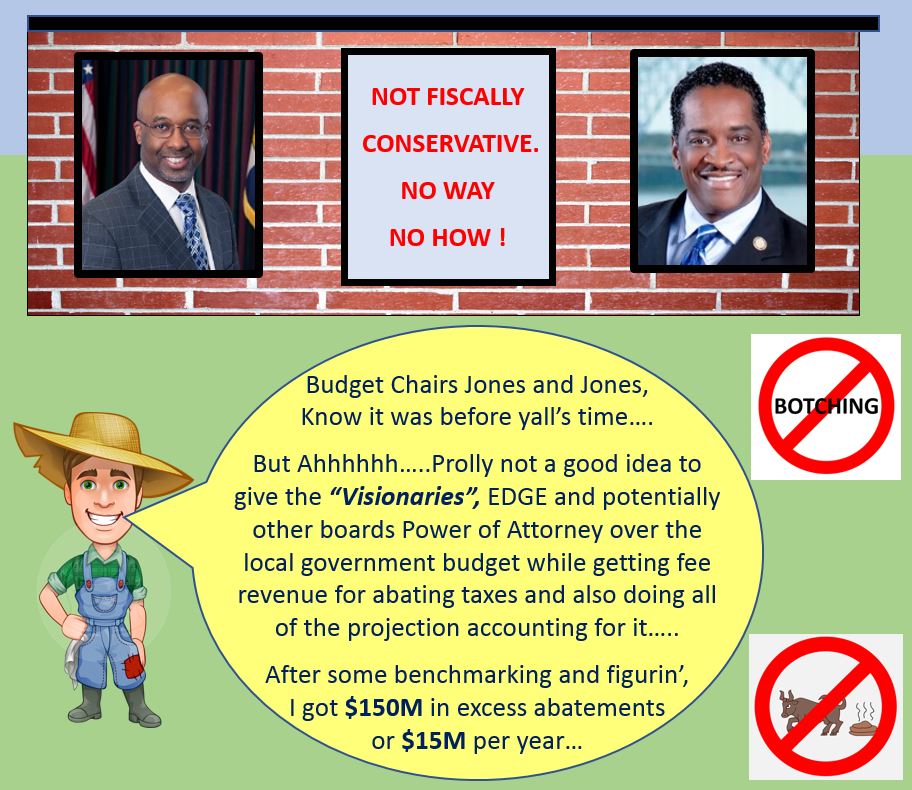 This blog follows up on a recent email exchange with a local CEO, discusses benchmarking and solutions for better measurement and tax revenue forecasting regarding PILOTs. There have been several good job PILOTs of late to include Pandrol, Power Transport, Indigo Ag, JNJ Logistics and Mimeo. Some of these wins appear to be due to the Chamber led economic development plan implementation under the leadership of Beverly Robertson and Richard Smith.

At the same time, property tax revenue growth has become a concern, which can, in part, be explained by excessive PILOT awards validated through benchmarking and an understaffed Assessor’s office. Through benchmarking, this blog identifies $150M in job PILOT excesses regarding EDGE, which is only 1 of 9 locally approved abating boards.

Additionally, in recent Commission testimony, the Assessor’s office estimated that they are 50,000+ personal property accounts short due to understaffing. Right sizing PILOT awards, informed through benchmarking and fully staffing the Assessor’s office can go a long way in supporting increased tax revenues. And, the Chamber’s implementation of a refreshing economic plan that stresses targeted industry recruitment, small business and workforce development will only help more. 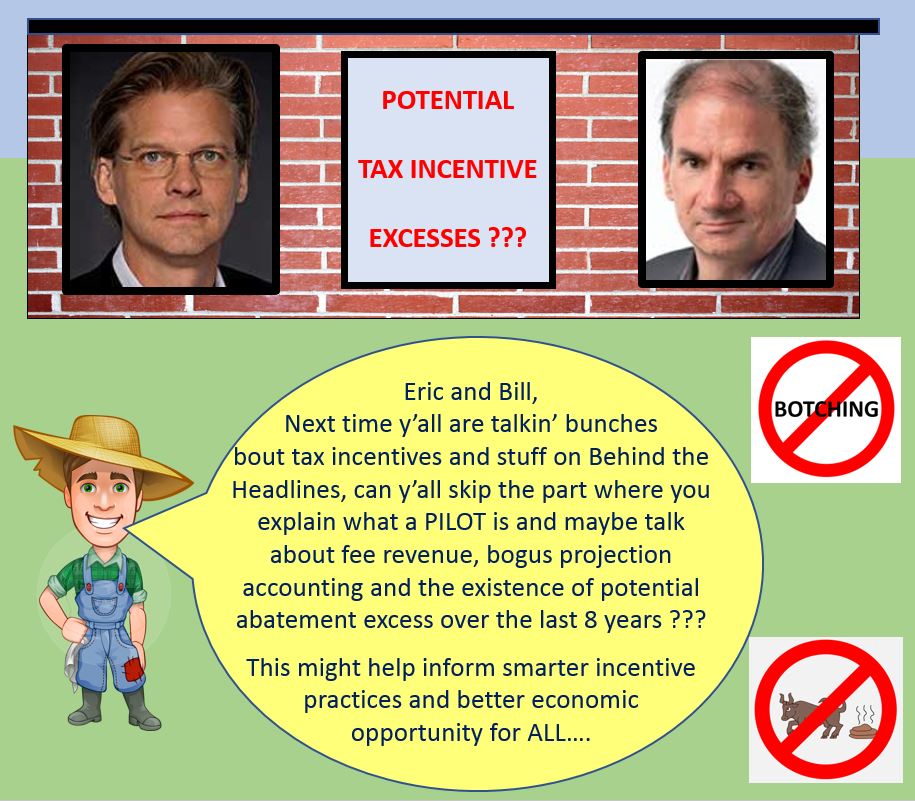 As a follow up on a recent healthy email conversation with a local CEO regarding tax incentives, where the CEO made several good points, the need for incentive benchmarking arose. This benchmarking analysis vs. Nashville is designed to explain where tax incentive excesses have occurred in the past while providing a basis for right sizing future tax incentives going forward. The analysis also comes at a time where the recent Pandrol PILOT can be touted as an exemplar, as it checks the boxes of a right sized incentive, providing new well-paying jobs and developing a distressed part of the City.

First, Nashville is a boom town, so a direct comparison is not fair to most cities as a boom town can stand to pay much less for new jobs in this economic development climate. But the question is “how much more should a “non boomtown” city pay for jobs in the current economic development race?”. In this way, based on the below findings vs Nashville, the Pandrol PILOT can be used as an exemplar while the below benchmarking can serve as a basis for competitive, non-excessive and targeted tax incentive strategy while leveraging Memphis key assets of the river, rail, roads and runway.

The below table analysis is based on PILOTs conducted from 2011 when EDGE began to 2017 where the Nashville data ends. The analysis does not consider wages. The data sources used for this analysis can be found on the EDGE Website and on the Nashville.gov website. Since EDGE and Nashville documentation bundle their projects in new job and retention abatements, calculations were performed to derive individual abatement totals for both retention and new job tax abatements. See below table:

From the table above, which excludes residential PILOTs (another concern), the following conclusions can be drawn for abatements made between 2011 and 2017 in Memphis and  Nashville:

So, through benchmarking, let’s do some figurin’ here to see if we can arrive at an overall excess abatement amount while generously considering all of the variables. Let’s allocate 25% increased abatement for non boomtown status  (like most cities) for Memphis/Shelby and an additional 100% increased abatement amount for a high property tax rate which ignores the Memphis/Shelby benefit of much lower property costs. In this way the recent Pandrol PILOT can in effect be used as a standard as it is 121% greater than the Nashville average while paying a good wage of $50K per year.

The above findings point to significant excesses thereby contributing an estimated $146M to Memphis/Shelby property tax revenue shortfalls or $15M per year.

All of this to say,  this benchmarking validates concern over tax incentive excesses when benchmarked against Nashville while hopefully knowing that benchmarking, the implementation of a new economic development plan and better measurement can help inform more fiscally conservative results and better outcomes for the community.

Since they are one of the financial sponsors, it seems that Shelby County Government should own economic modeling for incentives to facilitate more accurate measurement and forecasting for property tax revenues while serving as an involved public check on the economic development complex. After all, local government funds the fee revenue to EDGE that incents abatement awards, funds the tax abatement through decreased taxes and now helps staff the place. It seems local government would, at least, want to participate in accurately accounting for and measuring some of this stuff. The economic modeling and accounting function would fit well into the Shelby County Regional Economic Development Alliance work.

In this way, both better measurement and tax revenue forecasting could be accomplished for the overall good while supporting a fully staffed Assessor’s office. Excessive abatements and underassessed property are not good for anyone to include the overall business community. As an elected official, the Assessor could fully account for retention and new job PILOTs which under EDGE has resulted in incomplete accounting that has led to justifying excessive tax abatements. Excessive abatements contribute to property tax revenue shortfalls and incomplete accounting fails to contribute to effective property tax revenue forecasting and economic development measurement regarding tax incentives.

While this blog has ranted about excessive retention PILOTs justified with bogus accounting, EDGE’s expansion PILOT accounting is incomplete. For example, while the Pandrol expansion PILOT remains an exemplar, the projection accounting does not consider that many of those that will be getting jobs are already part of the tax base. After all, the people that will take these jobs are  mostly existing residents that locally live somewhere and pay sales taxes to eat and clothe themselves. And the modeling MAY not include subtracting out the existing taxes being paid on the location at 611 Winchester of $16,576 per year.

With that stated, NOT using economic multipliers, can in effect, take into account the existing tax base that will fill jobs. And, accounting for existing taxes being paid on the property can result in a more accurate total tax revenue generated number to inform better economic measurement and tax revenue forecasting.

To that extent, without concern for the right sized abatement award and fully accounting for the above-mentioned variables, the projected revenue for Pandrol can be reduced down from $5M to $2.5M while still benefitting taxpayers and considering a responsible $1.5M abatement amount. In this way, more accurate economic development measurement and more fiscally conservative tax revenue forecasting occurs.