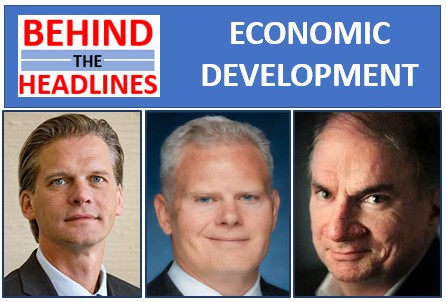 In  a City plagued with excessive incentives, there is no help from the local media. On Behind The Headlines, Eric Barnes and Bill Dries hosted Richard Smith of FedEx who is outgoing board chair of the Greater Memphis Chamber.

Barnes and Dries could have asked about return on investment (ROI) of incentives or potential incentive excessiveness. But instead, they just confirmed all cities offer economic development incentives without probing deeper on for example inflated bogus projection accounting that has gone to justify excessive incentives leaving the Memphis/Shelby taxpayer holding the bag. The ROI question would have potentially revealed that there is no reliable ROI methodology for measuring tax incentives for the customer taxpayer.

As far as FedEx, they have received $66M in state and local incentives for moving to a different local zip code downtown, promising 340 new jobs and investing $1.5B in hub modernization. Barnes and Dries could have asked Smith about the projected economic impact for $66M in state and local incentives given that there is no published economic impact plan. But that question was not raised.

To that extent, Smith played his Chamber and FedEx executive role while accurately describing the Chamber as a “business association” with the mission of economic recruitment, policy advocacy and workforce development and pitching the benefits of an incentive supported ($34M) Fortune 100 FedEx headquarters downtown.

Smith went on to accurately identify business recruitment prospects as the “customer” of the taxpayer when using public incentives in the work of economic development. At the same time, Smith did not identify the taxpayer as an “investment customer” in the use of economic development incentives just as shareholders are investment customers of corporations. This points to a problem in the current environment where there is no reliable independent public measurement of the public-private economic-workforce development complex. This leaves a Memphis/Shelby customer taxpayer dismissed in the midst of excessive corporate/real estate incentives.

Smith mentioned the known loss of Electrolux. But Electrolux can be defended as a one time bad deal. What can’t be defended, and the local media in a rigged system is doing little to help, is the systemic implementation of bogus projection accounting over 8 years to justify excessive  tax incentives ($250M+) for the benefit of corporate/real estate interests. This occurs while dismissing a Memphis community in need and true economic development in small business and workforce development.

Based on an Evanoff CA article, it appears that FedEx may be feeling the effects of a botched disconnected workforce development system. Its a botched system that has systemically occurred over the past 5 years under the publicly unmeasured FedEx/Memphis Tomorrow corporate community leadership cartel. The botched workforce development system has cost local business and taxpayers millions while excessive incentives have roared for the benefit of the small few and corporate/real estate interests.

So is FedEx Downtown a Good Deal for Taxpayers ?

No one really knows if the FedEx package of incentives is a good deal for taxpayers. There has not been a reliable economic impact summary published on the $66M in  state and local incentives. Local taxpayers will shoulder about $34M for the downtown and $5M for the hub project.

But we have enough data on the FedEx Downtown project to bust out a fiscal note to evaluate the incentive using responsible assumptions. Using a 2.0 multiplier for economic impact, over 22 years, the net fiscal impact for 340 new jobs is $12M. Based on the total incentive of $34M, that equates to a -11.9% annual return. This type of arrangement points to one of the causes of flat property tax revenue growth.

A more customer taxpayer centric total abatement amount, while being generous to the opportunity of locating downtown a cherished Fortune 100 FedEx Downtown headquarters would be a $23M abatement over 22 years or $10M less. This abatement amount would have insured taxpayers recaptured their abatement proceeds after a generous 22 year term. See below fiscal note: 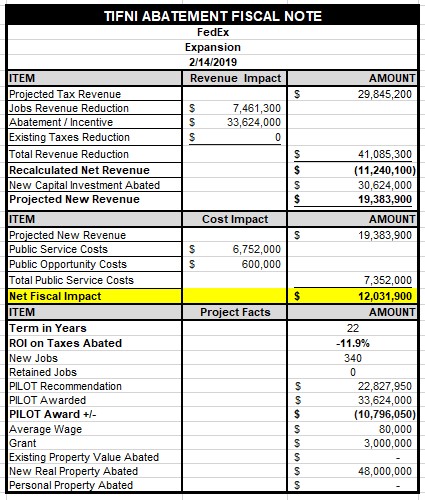 The local media is not helping to expose the story of a Memphis community in need that has been systematically hung out by excessive corporate/real estate incentives using bogus projection accounting. The only solution to helping Memphis move forward is independent public measurement that recognizes the taxpayer as the investment customer in public-private initiatives.

And besides, right sizing incentives is not a pro or anti-business endeavor. Its just a math equation to size incentives while recognizing the taxpayer as the investment customer in public-private economic development work.