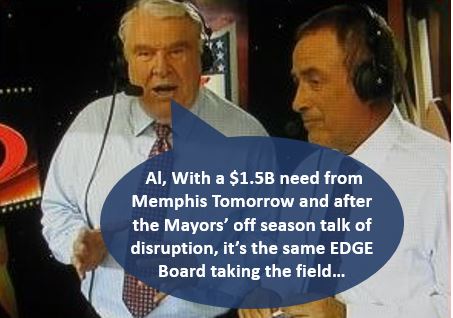 In reference to a recent Memphis Business Journal article, Richard Smith is only a small part in the disruption of the Memphis economic development ecosystem. Routinely dismissed by the non-investigative local press and the establishment of which Smith is part is the army of customer taxpayers supporting the disruption of the economic development system. The taxpayers are represented by bloggers, social media and activist organizations such as Memphis Raise Your Expectations (MRYE). These are customer taxpayers who have been proposing research based economic development solutions to the dismissive and arrogant Memphis Corporate Community Leadership (MCCL) complex for some time now.

At the most recent EDGE Board meeting, Board resignation was requested in public comment. Johnny Moore, a banker, EDGE and Memphis Tomorrow Board member, asked the public commentator, Joe B. Kent, for data to support his request. Kent reeled off 1) below peer average total wage growth since EDGE began, 2) EDGE botched workforce development efforts and 3) bogus retention PILOT accounting that abates taxes against current tax revenue that comes at an estimated taxpayer loss of $250M+ while being reported as a $600M gain. Kent failed to mention a lack of site availability to support economic development efforts.

Mark Halperin, EDGE Board member and Moore cited their volunteerism as accomplishments implying “self-sacrifice” without responding to Kent’s data supported concerns. If it were not true, it seems, Moore, a banker, would quickly defend against the bogus accounting assertion made by Kent but that didn’t happen. Bogus PILOT accounting has been used to justify excessive tax abatements that have undermined true economic development efforts in site readiness, workforce and small business development. Concerns over excessive incentives were additionally raised by EDGE non-voting board member and City Councilman Martavius Jones.

Given local EDGE results, perhaps Moore and Halperin should go volunteer somewhere else. Halperin was key to the important ServiceMaster win but has served on the EDGE Board for 7 years. There are plenty of volunteer opportunities in Memphis available other than their “self-sacrificing” EDGE Board volunteerism. And if Moore really wants to help, perhaps he can volunteer to ask his Memphis Tomorrow CEO organization to shut down, fulfill their promises and restore Memphis to average status with a $1.5 billion contribution to City and County Government by the end of the year. The $1.5B ask is supported based on an estimated $124 recurring annual Memphis / Shelby taxpayer loss that have come as a result of deficient performance from the Memphis Tomorrow taxpayer funded Fast Forward initiative. The Memphis ecosystem has declined ever since the founding of Memphis Tomorrow.

But for some reason, even given the results, a new EDGE Board is never considered by the Memphis/Shelby Mayors or the local legislative bodies that oversee EDGE. Reid Dulbeger, EDGE staff CEO, takes most of the direct criticism for EDGE. Dulberger is a highly competent bureaucratic administrator – the type of administrator that is needed for an organization like EDGE. But saddled with a highly deficient board, Dulberger gets hung out like many local staff of deficient MCCL boards. Problems in Memphis start at the top and board level as customer taxpayers are dismissed by the Memphis establishment. Its an establishment that has yet to globally define “economic development” which is needed to inform, drive and measure productive economic development efforts.

This is the second time the Chamber has punted workforce development with the first being when their Chairman’s Circle punted the Greater Memphis Alliance for Competitive Workforce (GMACW) initiative to EDGE. The most recent punt comes after stalled workforce development efforts over the past 4 years and local solutions are dismissed by the deficient MCCL complex in EDGE, Chamber and Memphis Tomorrow. And leaders, in the MBJ article, for some reason, don’t mention workforce as part of local economic development priorities.

In the EDGE meeting, a staff grant administrator for GMACW, in Alan Gumbel presented. Gumbel administers the Move-Hire grant that has resulted in a highly successful implementation led by the Greater Memphis Medical Device Council (GMMDC). GMMDC works to close the skills gap for the thriving Memphis biomedical device industry.  GMMDC counsels parents, students and teachers to help them better understand the great benefits of a career in the medical device industry. While still in high school, students can use the Tennessee Promise grant and dual enrollment classes to complete a diploma and then go directly into a job or an apprenticeship with no college debt. This is one career path that GMMDC advocates for when promoting careers in the biomedical industry.

But as far as connected workforce/education to employment efforts, GMACW has fallen short over 4 long years.  Staff, such as Gumbel, have been derailed by deficient board leadership and contracted partners that lack a track record of domestic United States workforce development experience. Simple connecting solutions in for example, a Chamber articulated alignment protocol to inform workforce development efforts, a common job board, student career portfolios or the use of the ACT National Career Readiness Certificate (NCRC) seem out of reach of a deficient MCCL complex.

At the EDGE meeting, Dulberger did sneak in the NCRC in his closing presentation but the NCRC was in small print in the corner of his presentation. The Strickland administration initiative that endorses the highly credible ACT NCRC solution strangely goes locally unpromoted. As a result and by high level choice, disconnected workforce development efforts persist in Memphis. Its like, for some reason, a large part of the solution for connecting workforce development efforts is a secret. So damn weird….

Disruption can be good but it has to disrupt the status quo. Without a largely new EDGE Board, needed disruption probably won’t happen.