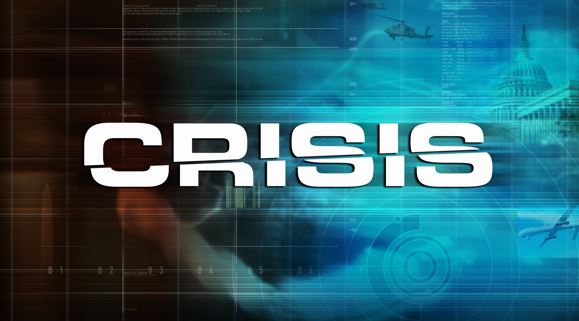 The emerging City Council crisis in system confidence is merely a product of a rigged Memphis system. Guided by a disconnected and arrogant elitist establishment, it’s a system that dismisses the customer taxpayer while remaining idolistically loyal to a closed social construct. State of Tennessee intervention will likely be needed to disrupt the rigged Memphis system for the benefit of Memphis/Shelby and Tennessee taxpayers.

For whatever reason, the elitist Memphis establishment, in practice, disallows voter participation in elections when possible, fails to educate their population, stifles small business development, slow walks needed public transit funding and undermines the tax base with excessive abatements all while using taxpayer dollars as income inequality explodes. Any wonder why economic development outcomes suffer in Memphis?

The crisis in confidence is currently evidenced by a standoff in the Memphis City Council that has emerged over the Council appointment of an open seat that resulted after voters were disallowed from electing their City Council representatives. Sensing a rigged establishment deal, Memphis City Councilmembers Joe Brown, Patrice Robinson, Jamita Swearengen and Martavius Jones walked away from Council proceedings resulting in the lack of a quorum to conduct Council business.

The walkout comes after Rhonda Logan, a recognized City Council District 1 community leader, who rallied district support and made a compelling Council presentation fell 1 vote short of the needed 7 for Council appointment as some Councilmembers consistently abstained in over 100 votes. Following the failed votes, Logan lost 2 of her votes in the permanent departure of Councilmembers Ford and Fullilove leaving Logan only 4 committed votes which set up the standoff.

It’s especially disheartening to see enthusiastic leaders, such as Logan that believe in their system as they are called to do, do all the right things to then be denied by a rigged system. Councilmember Jones said in proceedings “that if members just considered the resumes of the resulting finalist in Rhonda Logan and Ronnie Treadway that Logan would have easily won”. And Jones is right, but the rigged  system prevailed.

Regardless of any pronouncements by the Greater Memphis Chamber regarding workforce development, I identify with Logan. My personal encounter with the closed rigged Memphis Crump like system of the 1940s, came in the area of workforce development. I professionally pursued contractual consulting services with the Greater Memphis Alliance for Competitive Workforce (GMACW). GMACW is an initiative of the Memphis Tomorrow CEO organization founded by Joseph Reeves “Pitt” Hyde III that was to align local education and workforce development programming with employer demand. GMACW was also, at one point, a Chamber Chairman’s Circle priority stated in a so called “Moon Mission”.

I lost the professional engagement to a Canadian company that lacked a track record of delivery experience in the United States to which I did not object. Thinking that I just lost the deal, I observed the Canadian engagement fail. So, like Logan, believing in the system,  I began to again professionally propose services to address local workforce development challenges which involved joining the Greater Memphis Chamber of Commerce.

As a member of the Chamber, access to bylaws was strangely denied as well as annual membership review rights and renewal. When asking for a letter for reasons for Chamber dismissal, there was no response. In fact over the past year, as a member of the public, I have been asking for a copy of the Greater Memphis Chamber bylaws which were denied to me as member. I have had no success obtaining a copy while at the same time have obtained Chamber bylaws from Nashville and Charlotte just by asking for them or by finding the bylaws on the Internet.

It’s a closed economic development system in Memphis that shuts out its own people while depriving local small business and citizens’ access to adequate education and workforce development services. In addition to not developing its workforce, Memphis takes it a step further and shuts out it’s skilled workforce.

As the above occurred, initiative course correction oddly did not happen as over 60,000 students over the past four years have been under-served with a disconnected workforce development system. This is especially indicative of a rigged system. Having worked in communities across the country, where when work goes off track of even a favored provider of the local ecosystem, other communities course correct but not in Memphis within an apparent decline by design framework.

And instead of supporting local small business solutions, most recently, Richard Smith of the Greater Memphis Chamber announced, yet another relabeled workforce development initiative in Talent Pipeline Management. In effect, Smith and The Chamber are ripping off my proposed approach thus stifling, yet another local small business with apparent plans to run to Washington DC to award the work to an out of town conglomeration of providers.

But the Chamber likes to” smoke their own dope”. Just yesterday, at the Chamber luncheon, Beverly Robertson the new Chamber CEO was talking about “opportunity for all” and “workforce as the top economic development priority”. Trust me, even with FedEx’s Richard Smith at the Board helm, there is no sense of urgency at the Greater Memphis Chamber of Commerce.

The Chamber luncheon in many ways marks the beginning of the local social holiday party calendar. The Chamber will probably start shutting down for the rest of the year and start up the rigged up cycle again around the first of February when everyone gets all comfy and settled back in from the holidays. Again, there is no sense of urgency at the Greater Memphis Chamber of Commerce – NONE.

Any questions on why small business, workforce and economic development outcomes suffer in Memphis ?

What is consistent with the rigged system of Memphis is that the entitled establishment is always lobbying for more of your federal, state and local tax dollars to fund their public – private initiatives. Keep in mind, over the past 8 years, that the Memphis Tomorrow CEO organization is down in their selected categories of public safety, economic and workforce development while many of their nonprofits access your tax dollars. 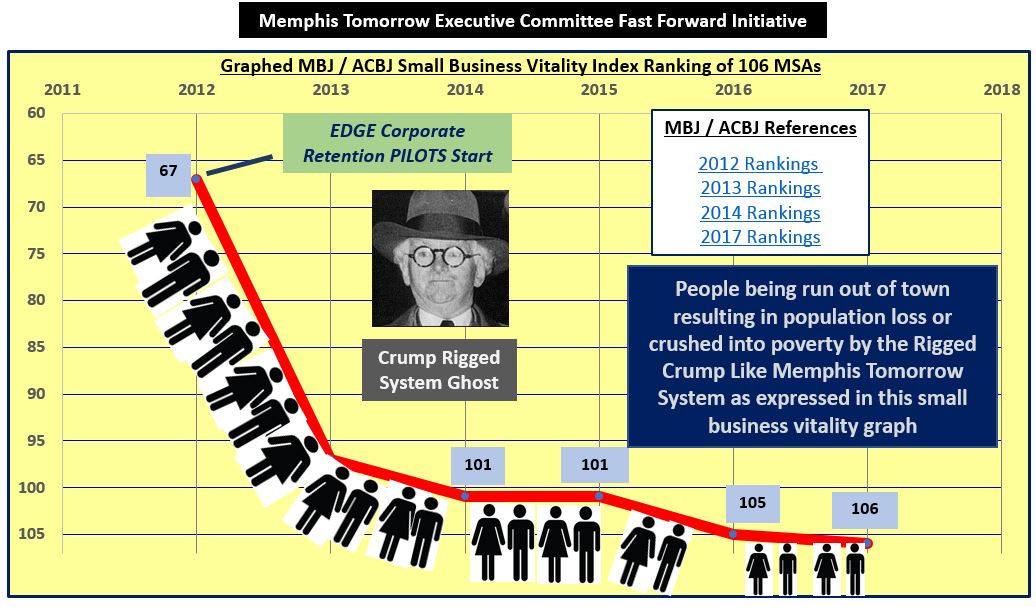 What often happens in Memphis is a relic of the Crump era. Bureaucratic programs using government funding are rigged up by the establishment. The hard to navigate nonprofit programs then serve a small select few that satisfy some rigged up definition of “small business” in this case while the local elitist culture starves out small businesses in need with bureaucracy.

With Memphis as the national leader in nonprofits per 10,000 population, “do good” programs proliferate throughout the community, to supposedly serve those in need and small business only to result in more of the same – in taxpayer expenditures without meaningful community benefit as the same establishment crowd thrives.

All of that to say, Memphis/Shelby government officials should take a pass on making immediate commitments of pension funds to yet another establishment public-private initiative or until the program shows results which includes a rigorous inspection of any reported outcomes.

Without an external event, Memphis has declined ever since the Memphis Tomorrow CEO organization was founded by Joseph Reeves “Pitt” Hyde III over 15 years ago . This data supported reality points to deficient corporate community leadership that spans elected official terms. Using your tax dollars, Memphis Tomorrow promised a better Memphis for all but that has not materialized.

Blessed with financial resources, Memphis CEOs should just pay their ethical debt back to the taxpayers which would be $1.5 Billion, shut down, stop rigging up the system and stifling economic growth. The $1.5 Billion would fund the estimated $124M recurring annual Memphis/Shelby County shortfall that has resulted from deficient performance of taxpayer funded initiatives under the guidance of Memphis Tomorrow.

All  the above to conclude, that Memphis Tomorrow CEOs are clueless in the management of tax dollars for the purpose of evolving the Memphis ecosystem. Using its vast resources, Memphis Tomorrow should pay its ethical debt of an estimated $1.5 Billion, shut down and stop rigging up the system.

Conclusion and The State of Tennessee

In a former life, protest was foreign to me. But as it relates to disrupting the rigged Memphis ecosystem that fails to serve customer taxpayers, protest is the only way. This MCCL Measured site serves as a form of protest as was the recent walkout by City Councilmembers. Rigging the system is all that the Memphis establishment knows. Engrained in the leadership culture, it’s been going on so long that it’s normal to the Memphis establishment. And for all the discussion about race in Memphis, the rigged system is not racially driven based on conversations with a number of African American business leaders and activists but instead the rigged Memphis social construct is class based.

If the State is to realize the potential of Memphis for the benefit of Tennessee taxpayers, they will be required to intervene and seek out non-establishment voices in Memphis to disrupt the rigged system. It’s a closed Memphis Crump rigged culture of the 1940s that in its present form disallows voter participation in elections when possible, fails to educate their population, stifles small business development, slow walks needed public transit funding solutions and undermines the tax base with excessive corporate/real estate tax abatements.

After all, it took outside influences in Estes Kefauver to confront the Crump Machine. While its good news that Memphian Lang Wiseman has obtained a high-level appointment in the Governor Elect Lee Administration, Wiseman, a Memphis establishment player may not be able to see the rigged state of Memphis since its all the establishment knows. IF this is the case, the Wiseman appointment will be a disservice to Memphis and the State of Tennessee.