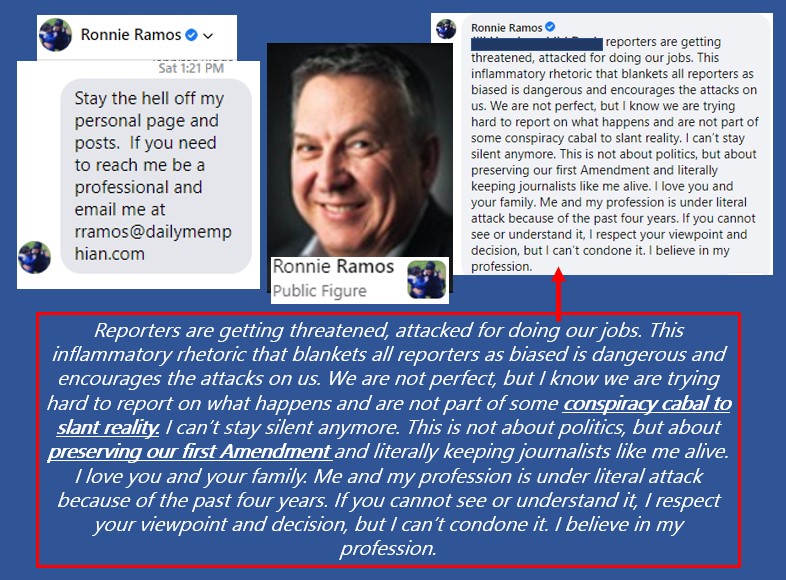 What happens, when Facebook public figure and “Tough” newsroom editor, Ronnie Ramos, has the journalistic credibility of the Daily Memphian publicly questioned ? Ramos, responds with

“Stay the hell off my personal page and posts. If you need to reach me be a professional and email me at rramos@dailymemphian.com“.

As a public figure, Ramos can be found discussing his profession on Facebook. I asked Ramos, as a public figure, on his Facebook page, “Why is the Daily Memphian censoring my technical comments of their articles?”.  To which, Ramos responded with the above.

The Daily Memphian is now, during COVID, censoring technical comments from the public on their published articles. The Memphis Elitists cannot handle an educated debate in the discourse. Besides, they have routinely demonstrated that they want no thought diversity in or real education of the electorate. After all, as a matter of process, they continually botch the workforce development system.

No reason was given to me, by the Daily Memphian, of why my comments were censored. This mirrors my experience, when kicked out of the Greater Memphis Chamber, without stated cause or access to Chamber bylaws. The Memphis Elitists are just a bunch of pansies that cannot handle thought diversity within the discourse.

Ramos Facebook comments are shown in the header image above, where he publicly discusses concerns of press reporters being threatened, while not  part of a “conspiracy cabal to slant reality” and discussing the preservation of the “First Amendment”. Keep in mind, I threatened no one, but just asked a question.

At the same time, a case can be made that the Daily Memphian is part of a “conspiracy cabal to slant reality”. And outright censorship, of public commentary on published articles can be factually proven, which will be done in the section after next.

In just one of many non-reporting examples by the Daily Memphian, recently Bill Dries, of the Daily Memphian, chose not to cover the overt obstruction, by the County Commission, of due diligence, publicly requested by County officials, of the $62M Downtown Memphis Commission PILOT extension fund, for unneeded downtown parking. Then there is the Daily Memphian partnership with the university complex and the University of Memphis, as exercised through columnist Otis Sanford and “investigative” journalist Marc Perresquia.

Sanford chooses to write about subject matter, within a tired and mostly racial context, that focuses on statues and history, while wholly avoiding FedEx/Memphis Tomorrow hatched, local economic policy implementation, that oppresses the taxpayer, in a majority Black community in need. At the same time, Perresquia’s investigations never intensely question the oppressive Memphis Tomorrow public private complex, while his recent investigation of police use of force data, avoided any questioning of Memphis Tomorrow’s Crime Commission, which is publicly charged with data driven policing implementation.

Meanwhile, the Daily Memphian fails to question published documentation of tax abating boards, that are financially incented to represent corporate/real estate interests. This lack of questioning, through the free press, further helps to underwrite excessive tax incentives for corporate/real estate interests, with grossly overly rosy and unquestioned economic impact projections, on the back of a majority Black community in need.

The above occurs, as the Daily Memphian fully leverages,  public tax dollars, with further outreach through the public WKNO and through a radio station partnership with the public University of Memphis. All of this is a product of an anonymous donor created news outlet, in the Daily Memphian, that further fails to correct material mistakes in articles. Does that indicate an intent to slant reality ?

Call if what you want. It feels like a slant on reality and a cabal to me. But now there is outright censorship.

On 1/22/21, I replied to two individuals, with technical comments, on this Daily Memphian PILOT article. The comment replies were deleted. So thinking, there was a technology glitch, I reposted the same comments, but documented the results, as reply comments were deleted by the Daily Memphian on multiple occasions. I watched them remove one reply comment and a notice popped up saying “deleted marked as spam”. Then the notice disappeared. The comment replies were made on 1/22/21, at approximately 10:01pm and then down by 10:03pm. Below is the documentation. The reply comments said:

“Tom, Do you think EDGE calculated in the net impact after Imperial cancelled the contract with the local 3PL ?”

“Reid (Hampton), What your research means is that EDGE claimed revenues should come down from $1.6B by $1.25B to about $350M. That would help explain part of the local public revenue crisis. EDGE uses unhandicapped projected tax revenues to justify excessive incentives. That’s not to say incentives are not appropriate, but not so much…”

On 1/23/21, I commented on a DMC Mobility Center article, and the Daily Memphian again censored the comment. The comment said:

They talk about Downtown walkability but don’t want to have anyone walk for or corporations to adequately pay for parking. According to the DMC parking study, they don’t need parking in the Downtown core. Yet $62M was appropriated for Downtown parking without requested due diligence by County officials. Investigation reveals that $23M in commercially unavailable loans for private parking garages were made to developer partnerships using taxpayer money. One partnership included Pitt Hyde. And then, after getting 45 and 60 yr 2% and 3% taxpayer funded loans, they get 20 yr tax abatements on the parking garages. Its runaway elitism where all of Shelby County pays for the small few. The $42M mobility center is primarily for the Carlisle One Beale development who already received a $10M private parking garage loan, as part of $100M+ in local tax incentives backed by a DRAFT and bogus economic impact study. And now taxpayers have to pay to clean up the incented preservation of 100 N. Main Blight. Go Figure…. 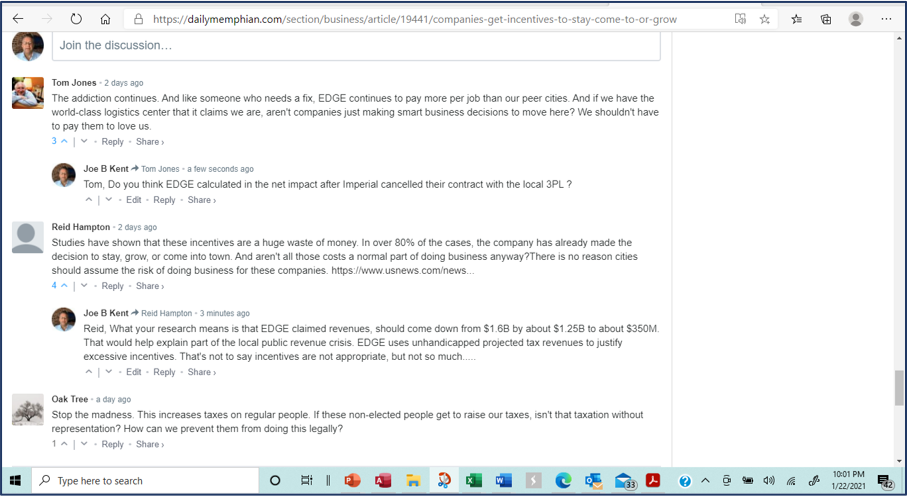 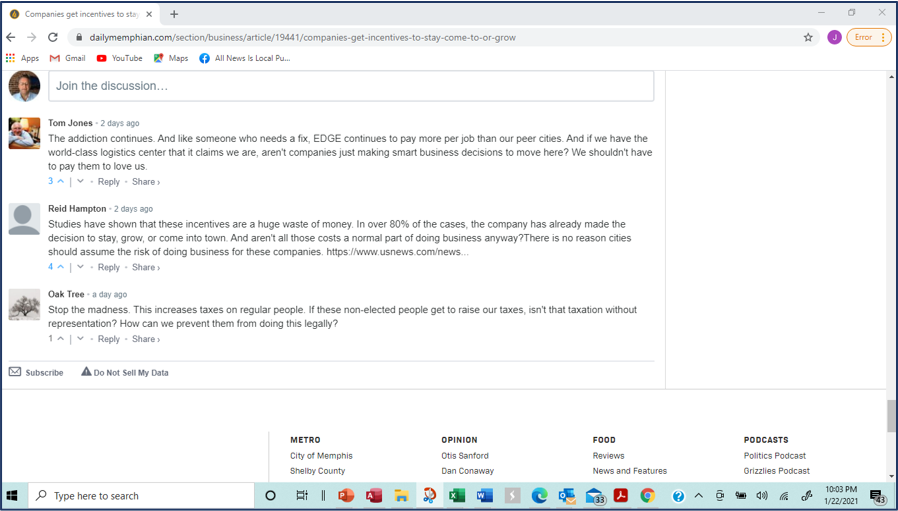 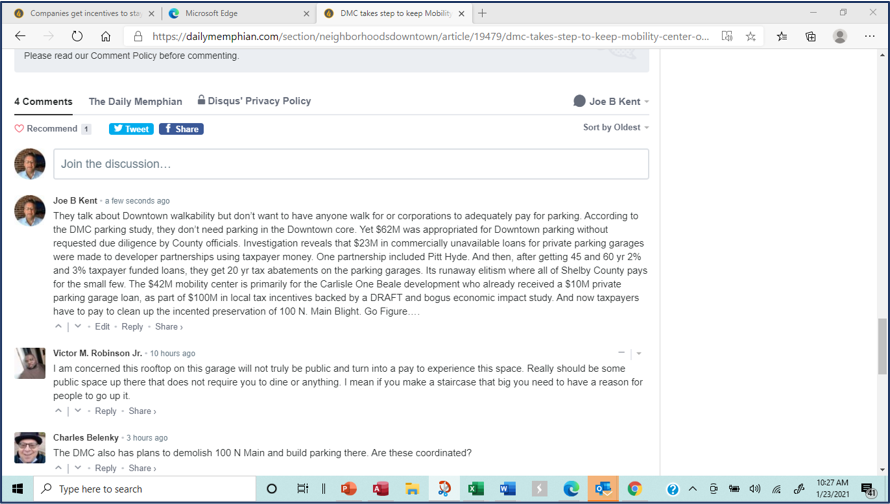 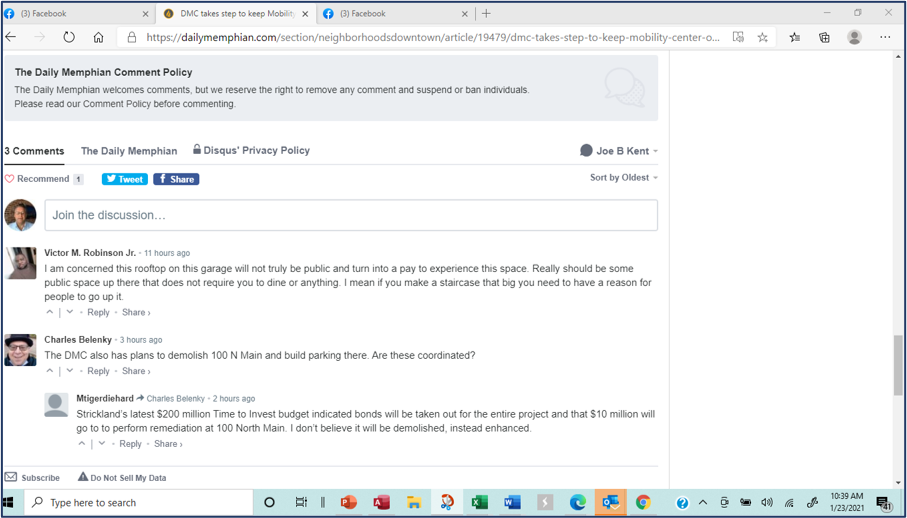