The public University of Memphis (UofM), in partnership with the Greater Memphis Chamber (GMC),  has moved the economic development goal posts. The moved goal posts come through a research partnership with the Washington DC based Brookings Institute, who in the last Memphis/Shelby FOCUS economic development plan, failed to deploy any measurement parameters whatsoever!

In typical Memphis rigged system fashion, the Brookings failure was rewarded with yet another contract by the UofM/Chamber partnership. The moved goal posts come in the form of Brookings establishing a more accommodative 10-member peer group (to be examined in the following section), than the 16-member group previously established by the UofM Memphis Economy project.

Riddled with conflict, the UofM / Chamber partnership is an act of public treason and could only be the brainchild of a civic, corporate socialist imbecile. It’s a partnership that surrenders public university thought leadership, on matters of public economic development, to the private GMC, all while the UofM hypocritically pursues Carnegie R1 institutional research status.

Keep in mind, the UofM touts $98M in additional annual wages or effectively $3M in estimated Memphis/Shelby tax revenue resulting, upon becoming an R1 institution. But what if, in 2017, the UofM had just been a solid R2 public university community partner?  In this way, the UofM would have  locally advocated the elements contained in the UofM “We Are Not Lost – Amazon Gave Us a Road Map”  publication, while leveraging their originally selected 16 member peer economic measurement platform.

Had the former occurred by the UofM, there is a good chance that the $3M increase in annual local tax revenue from R1, would be dwarfed from 1) tax incentive reform and 2) the implementation of a public workforce/economic development plan. Had these two items occurred, future local tax coffers would have likely seen $25M+ additional in annual tax revenue.

That’s not to mention that such a local public university, would not have been on binge, bullying the local taxpayer out of $45 in local grants and tax incentives. Let’s hope the UofM achieves R1. But in the end, being a good public partner and independent university thought leader, dwarfs R1 status for community benefit.

And another aside to lacking local credibility was Dr. David Rudd, strangely finding it necessary, to assert a false top 25 ranking for UofM Men and Women tennis teams before the UofM Board of Trustees. The assertion came regarding the ridiculous $10-14M City participation in the $20M tennis center. In 2019, the UofM was not even in the Men’s or Women’s top 75 and that is nothing against the local tennis program and its great student athletes at all.  But sadly, false assertions seem to have become habit for the UofM under Rudd. See 15 minutes in the Trustee meeting video.

Its just such a strange and unneeded false assertion, when all that needed to be said is that “Our UofM Tennis teams are quickly becoming more competitive, as compared to recent years”. Anyway, back to the moved goal posts. 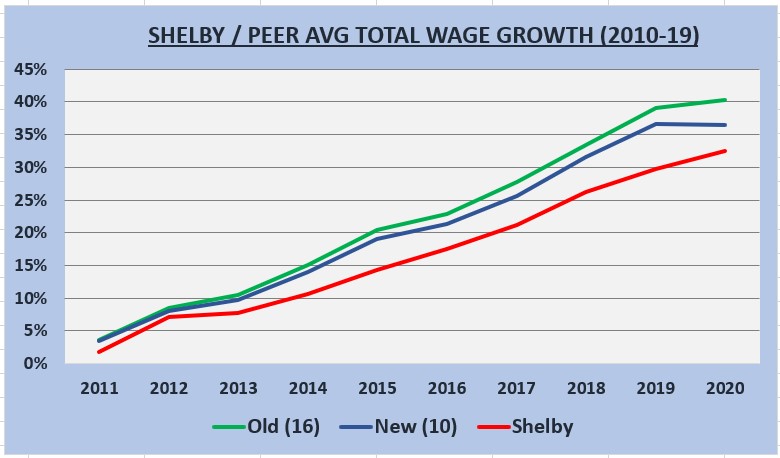 The elitists will do ANYTHING to control the narrative, to include not measuring anything or moving goal posts to dodge accountability. That’s why nothing seems to change. The problem is not so much below average total wage growth but how much taxpayers have paid, in excessive tax incentives, for deficient growth.  Further, it appears the elitists want to talk about governmental consolidation, which while not transformational, does have merit.

But unfortunately, instead of just publicly advancing the case for consolidation, the elitists must move goal posts and seemingly rig data sets, for their presumed consolidation case. So here is what has happened to the previous 16-member peer group and data set. Gone are Charlotte, Greensboro, Jacksonville, Omaha, Cincinnati, Tulsa, and Little Rock. New, to the now 10-member peer group is Milwaukee and includes: Birmingham, Louisville, Nashville, Indianapolis, St. Louis, Kansas City, Memphis, Oklahoma City, New Orleans, and Milwaukee.

Most alarming, is the illogical exclusion of Charlotte from the peer group, who like Memphis, is a southeastern non-consolidated border city with a significant 33% Black population. The non-consolidated Charlotte also led the previous peer group in total wage growth. So, it appears, if you can’t beat them, exclude them and a high performing non-consolidated city vanishes from the data set.

Also illogical is the new addition of Milwaukee to the peer group, which is a northern non-border city, with a lower than Charlotte 27% Black population and lower total wage growth than Memphis. In the end, the new peer group allows Memphis “economic developers” to shave 4% points off their 10 yr. total wage growth deficiency, against a lower peer average of 36.5% down from 40.3%.

To get a complete understanding, the below table contains both old and new peer groups, with recently excluded members shaded in red. The chart at the beginning of this section, visually depicts the impact of the  moved goal posts. Also below, are tables and charts for Tennessee municipals. 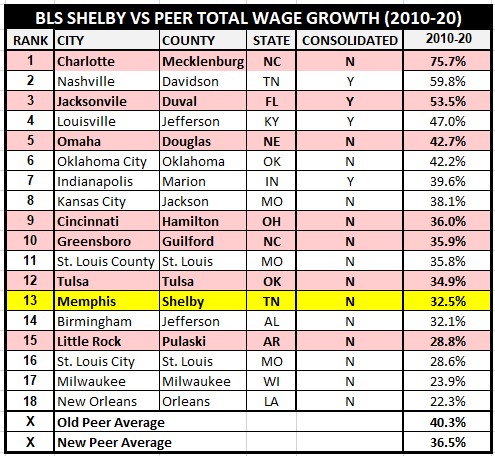 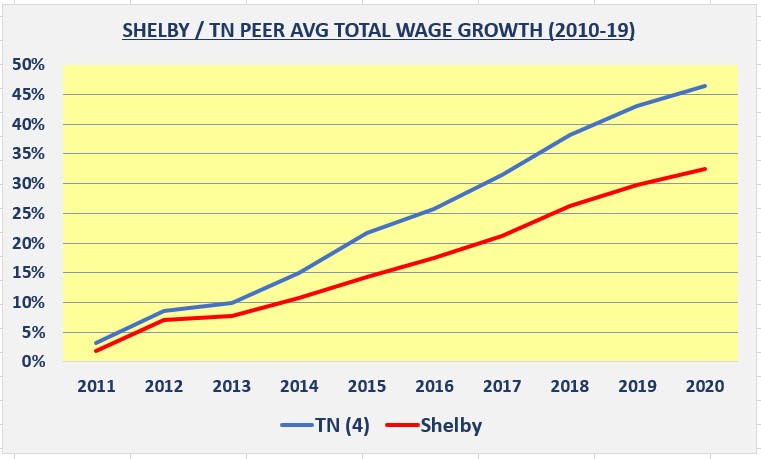