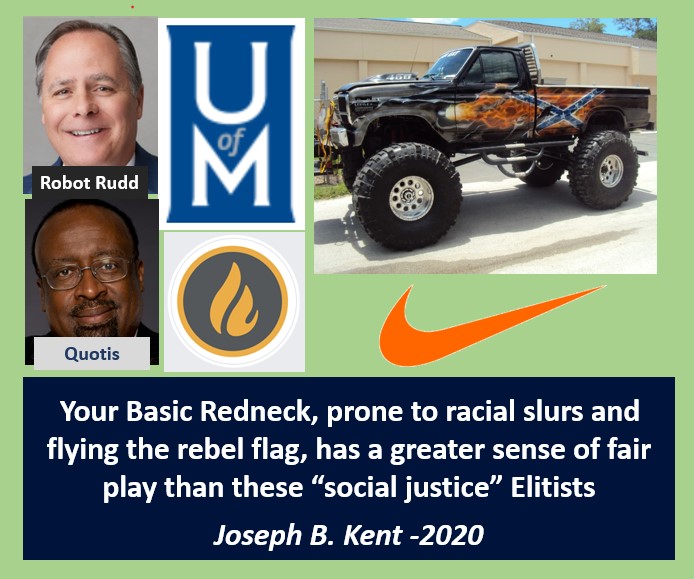 UofM plans to extend its already dominant local public-private journalism reach with a joke “systemic racism” narrative. Its impossible to advocate a “systemic racism” narrative, in a majority Black community in need, without calling out the locally dominant “corporate elitism” doctrine. This effort is an old timey Memphis Tomorrow sham. Why its a joke UofM narrative, will be fully documented later.

Based on the recent Commercial Appeal article, The UofM will leverage their public funding to advance its “systemic racism” message through their Institute of Public Service Reporting/Radio partnership  with the anonymous donor led Daily Memphian, as previously reported .

In the CA article, UofM President Robot Rudd said, “It is clear that Memphis needs us”. Hello Robot ! Memphis does not need a joke UofM Board of Trustees that lacks in thought diversity. The UofM Board of Trustees, has 3 board members with direct relationships with FedEx, while the other representatives are more of the same companies that serve on all local boards in First Horizon, International Paper, Sedgewick and Methodist.

This lineup, offers the community more of the same, in no thought diversity that would accommodate independent public university thought leadership on economic and community development matters. The Board is just an extension of the rigged and elitist Crump era Memphis Tomorrow corporate machine.

Meanwhile, the UofM and donor led Daily Memphian (DM) already collectively hog the public-private journalism space. The UofM’s status quo Quotis Sanford is an opinion columnist for the Daily Memphian. Quotis writes slightly left of center on political matters and has recently discussed, on more than one occasion, symbolism and confederate era statues. Quotis does not broach the topic of corporate elitism.

The DM further partners with the UofM’s Institute for Public Service Reporting for “investigative journalism”. Its an investigate partnership that hatched the misdirected story of  claimed City of Memphis obstruction in police “use of force” data.

Then there is the local non-reporting of an apparent EDGE PILOT default by “social justice” Nike. The UofM contracts exclusively with Nike for sports apparel. And the DM has a show, Behind the Headlines, on the publicly funded WKNO.

Through its vast public-private media alliances, the UofM has demonstrated itself to be s joke, on matters of community and economic development, in confronting corporate elitism that plagues a majority Black Memphis community in need.

Since  the installment of the UofM Board of Trustees, The UofM has been a purveyor of corporate elitism, on the back of a majority Black community in need, while devouring through significant local funding. The worst example was taking the last available $3M in City of Memphis funding for an elitist $19M tennis center on City provided property.

Below, are some additional jokes precipitated by lacking thought diversity coming from the UofM Board of Trustees:

Joke #2 – The Benjamin Hooks Institute for Social Change. They speak in platitudes while not advocating any specific policy positions, in chambers, that confronts the corporate elitism that plagues a majority Memphis Black community in need.

Joke #3 – Public Safety Institute. While working in partnership with the Memphis Tomorrow Memphis Shelby Crime Commission, when the need for police “use of force” data arose, the partnership had no data after being locally charged with the work years ago.

Joke #4 Institute of Public Service Reporting. Fails to investigate the corporate elitism that oppresses a majority Black community in need.

Typically, one will see the UofM in legislative chambers lobbying for local funding for themselves and not advocating policy positions for the community. The new local Board of  Trustees appears to have robbed the Memphis community of independent public university thought leadership.

Advancing “systemic racism”, in a majority Black community in need, while authoring corporate elitism, is a sham. Besides, the elitists feel safe with the local systemic racism agenda. After all, currently, the agenda is nothing more than renaming streets and blaming the police for all of society’s ills.

In the end, your basic redneck, prone to racial slurs and flying the rebel flag, has a greater sense of fair play than these “social justice” Elitists……