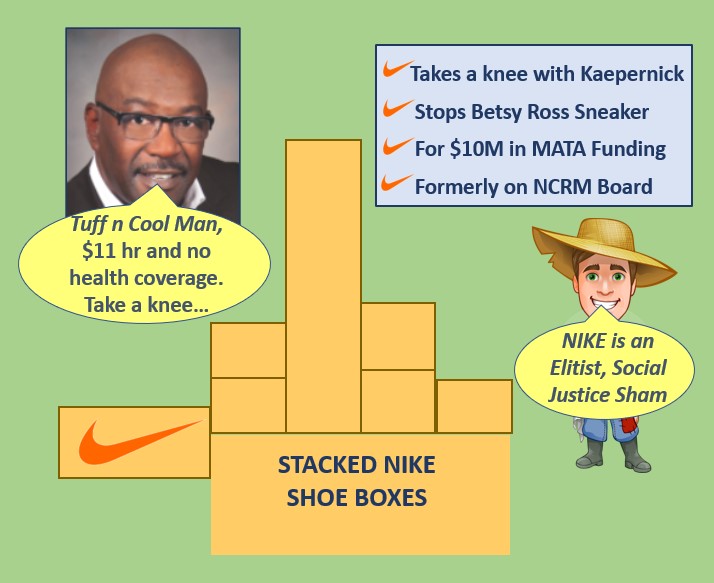 True story, Nike is Not a social justice company. Let’s see if the following gets any local media coverage. After getting a $58M PILOT in 2012, in 2019, while Nike sat on the National Civil Rights Museum (NCRM) Board, 1169 low wage Memphis Nike workers lost subsidized health coverage. And there is more.

After being part of botching the local workforce development system, why would “social justice” Nike’s Willie Gregory want to be Chairman of the Memphis Chamber ? Its baffling, and Gregory recommended Beverly Robertson for Chamber CEO. Wonder what Robertson, formerly NCRM CEO, thinks about what has happened with Nike’s Memphis operations ?

Based on Nike’s pre-COVID and most recent 2019 EDGE PILOT compliance report , the following can be concluded:

1,169 Nike workers lost their subsidized healthcare benefits in 2019 from 1918 which is not compliant with EDGE PILOT requirements. Nike reports 749 employees with healthcare benefits, which is well below their PILOT commitment of 1912, while also reporting 1949 employed at the Nike Northridge facility (pg. 4). It further appears that wages offered through Adecco temporary services, headquartered in Zurich Switzerland, for Nike positions, have fallen below $12 per hour

Again, with Memphis in need of increasing wages with benefits, improved workforce development and  increased spending with MWBEs, why would Willie Gregory want to be Chamber Board Chairman?  Nike clearly has no passion for the needed work in Memphis. But Nike does have a passion for reducing wages and benefits on the back of a majority Black Memphis community in need, while touting social justice, through public relations. Let’s take a look.

After also championing taking a knee with Kaepernick and the discontinuation of the Betsy Ross sneaker, the above video description states:

“We [Nike] will continue to stand up for equality and work to break down barriers for athletes* all over the world. We will do and invest more to uphold longstanding commitment in supporting the Black community and partnering with world-class organizations dedicated to ensuring racial equality, social justice, and greater access to education.”

Additionally, Nike is short on their PILOT capital investment $28M in real and $17M in personal property ($45M). At the same time, Nike claims to be making an undefined, $36M capital investment that is not part of the PILOT (pg. 3). Perhaps they are making the investment, but it does little to soften the blow of 1163 low wage Nike workers without subsidized healthcare benefits.

And finally, no MWBE spend and not paying City PILOT taxes in 2018 is indefensible. The wealth transfer is on with Memphis/Shelby taxpayer money being transferred back to the much more affluent Portland Oregon area.

Right sizing the original Nike PILOT would have reduced it by $38M from $58M to $20M and that reduction assumes Nike is compliant. The case has been and is clear for PILOT reform. Besides, Memphis economic development challenges are rooted in small business and workforce. The former are the casualties of local “economic development” policy.

And finally, “social justice” Nike, from the top of the Memphis ecosystem, has lowered the Memphis corporate community performance standard, yet again, on the back of a majority black community in need. In this case, the problem is not “systemic racism” but again, unchecked runaway elitism…