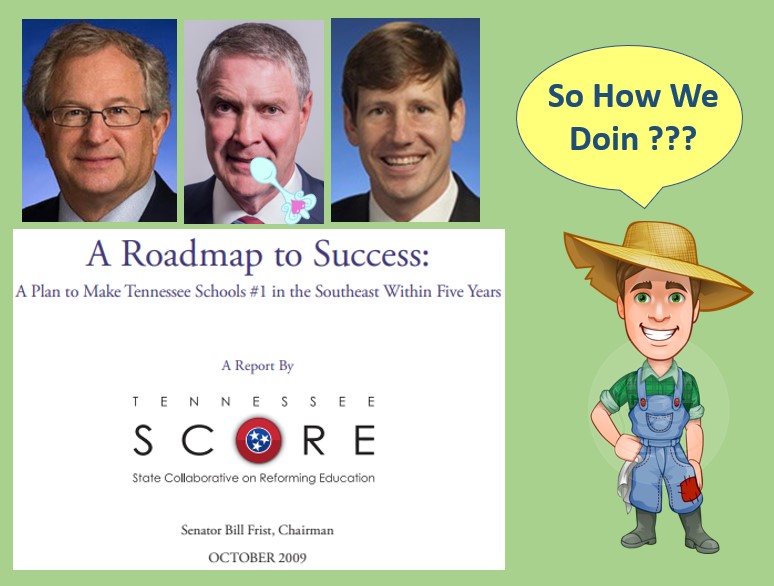 It seems  the promise land for every retiring elitist politician is to find an unaccountable nonprofit post. That’s what Bill Frist did, becoming Board Chairman of the State Collaborative on Reforming Education (SCORE).

SCORE behaves much like a vendor lobby as opposed to a leader in educational policy and innovation. As an example, in 2021, the General Assembly obstructed testimony from local educators on SCORE’s Read 360 initiative. This is hard to explain, as these are the very educators that will be required to implement the initiative.

Under Frist, SCORE is a complete failure. Using data from the Integrated Post-Secondary Education Data System (IPEDS), Tennessee ranks #10 out of 11 Southeast states in post-secondary completion percentage increases since 2010. This is what happens, when an organization like SCORE, effectively teams with elitists and General Assembly members from the State’s largest Shelby County to botch the workforce development system.

For starters, with such an aspirational Southeast leadership goal, one would think that Frist and General Assembly Education Chairs in Mark White and Brian Kelsey, would not let the high school career technical education (CTE) concentrator rate implode, in the State’s most populous and largest school district in Shelby County. But that is what they did, starting at an already miserable 24% in 2016 and dropping to 12% in 2019, per State Report Card data.

And further, from 2010-19, Shelby County’s Southwest Community College completions fell by 6% from 1124 to 1057, trailing all State of Tennessee community colleges for the period. At the same time, per a SCORE report, the labor market in Memphis is rewarding 2 yr degrees, with Southwest having 28% median wage increases since 2017, leading all State of Tennessee community colleges for economically disadvantaged students. Regarding wages for economically disadvantaged populations, there is not a better economic development story in the state!

In a nutshell, the above data observations should explain, specific workforce development challenges in Shelby County, Tennessee. What is going on? The botching of high school CTE and community colleges seems to come from the top and intentional in Shelby County !

Intentional because prioritizing high school CTE and community college is just pushed aside by SCORE and locally by the University of Memphis (UofM), with it’s new Governor HackSlam appointed Board of Trustees.

Its a horrific public result in Memphis, with a public UofM hogging public discretionary funding and the discourse from their Chamber perch, all while talking diversity and then bullying the taxpayer, in a majority Black community in need.

But what about SCORE’s Tennessee Southeastern state leadership goals ? 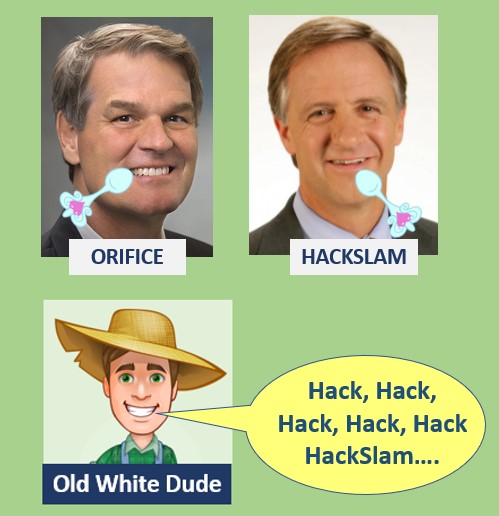 While aspiring to be #1, under Frist’s SCORE and Governor HackSlam,  the State of Tennessee has not fared well in the Southeast, as measured by IPEDS data. This occurs as SCORE celebrates the 2021 General Assembly session, with respect to their phonics and ACT WorkKeys advocacy. Phonics and ACT WorkKeys are needed but hardly innovative.

Since 2010 through pre-COVID 2019, Tennessee ranks #10 out of 11 states in overall percentage post secondary completion increases, #9 in less than 4yr and #10 in 4yr or more completions out of 11 Southeast states.

We will see if Orifice Ingram attempts to take credit for Georgia’s success in the ranking. Georgia was well on its way in Southeastern leadership in 2015 with a 34.9% increase at the time, well before Orifice’s YouScience arrived on the scene in Georgia.

As far as better aligning post secondary completion production to occupational demand, Alabama, Mississippi and North Carolina are leading the way, with the greatest percentage increases of less than 4 yr degrees.

Anyway, here is the data. 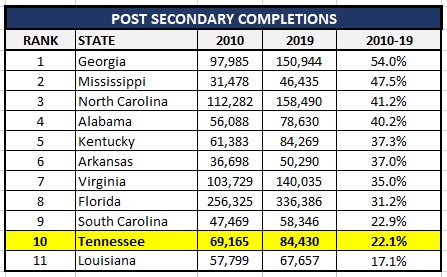 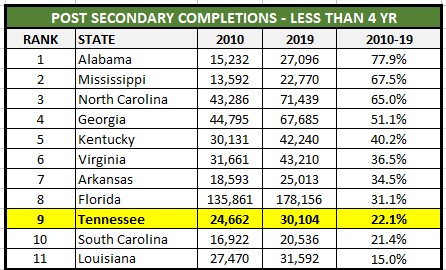 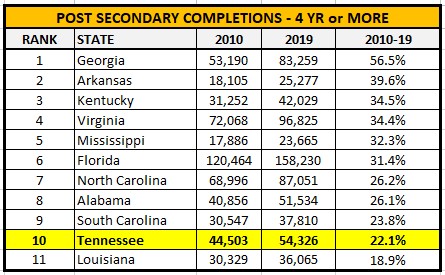