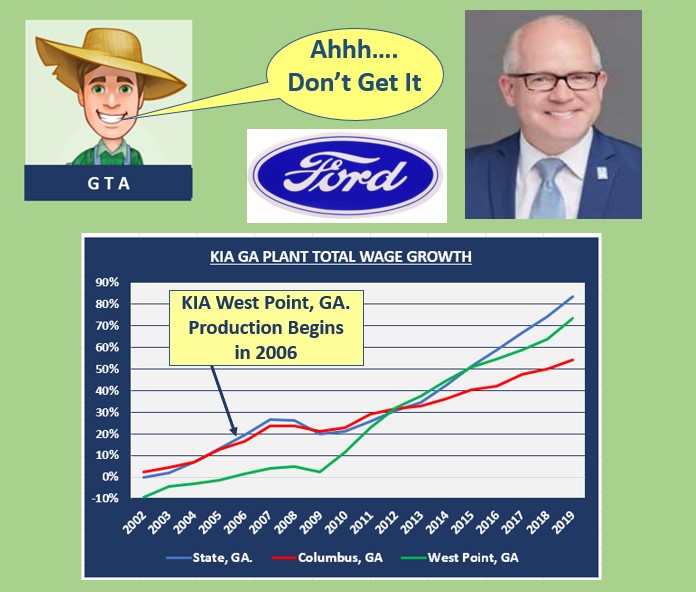 With all of the Greater Memphis Chamber celebration, one would think that the Ford plant was locating in Shelby County. But it’s not. The Ford plant will be located 50 minutes away in Stanton, Haywood Couty, TN.

Meanwhile, discussions are beginning to occur about light rail from Memphis to Stanton to facilitate workforce transportation. But wouldn’t such light rail just be a temporary need? Won’t those Memphis workers just move closer to Stanton once they sustain higher incomes for a time?

At this point, based on the above logic, I just don’t get the benefit of the Ford plant for the City of Memphis. So, I looked into it further based on a similar plant deployment with Kia in West Point, Troup County, GA and near the larger population center of Columbus, Muscogee County, GA. 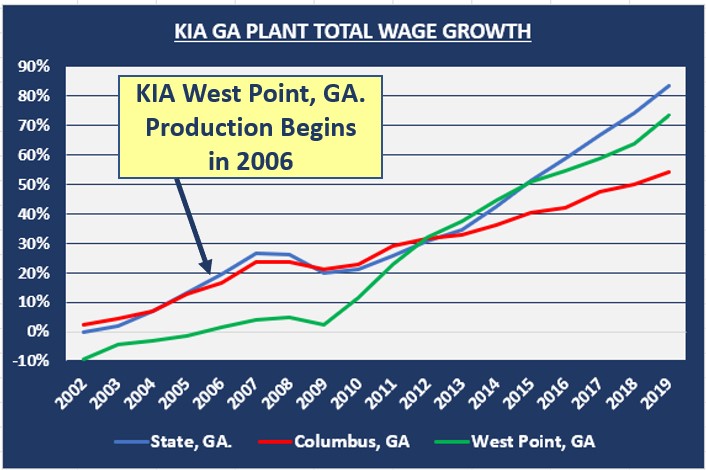 Kia opened in 2006 in West Point, GA and employs approximately 2,700. Ford will employ 6,000 drawing from a larger population base in Shelby County than what exists in this particular Georgia region. Given the population of the TN and GA regions, a proportional similarity exists between respective projected occupational demands and regional populations in both TN and GA.

To that extent, the following observations can be made from the BLS sourced data chart above regarding the Kia economic impact on County total wage growth. In this example, West Point’s Troup County is Haywood County, Columbus’ Muscogee County is Shelby County and Georgia is Tennessee. See below:

In 2006, the population center of the region in Columbus GA’s Muscogee County (Orange) growth accelerated briefly only to fall off at the beginning of the great recession along with the State of Georgia (Blue) and Troup County, GA (Green).

In 2012, Troup County’s total wage growth sustained exceeding the percentage wage growth of Muscogee County from 2012-19, while decelerating below the State of GA in 2015 but remaining competitive with the State through 2019

In the end, Columbus GA’s Muscogee County and the population center for the remotely located Kia plant, was not competitive with GA statewide percentage total wage growth. Could this be the future of Memphis and Shelby County with the Ford plant deployment in remotely located Haywood County ?

Given this need, a Ford plant in Haywood County does not appear to be the answer. The answer is a local economic development plan that emphasizes Memphis and Shelby County small business and workforce development…..