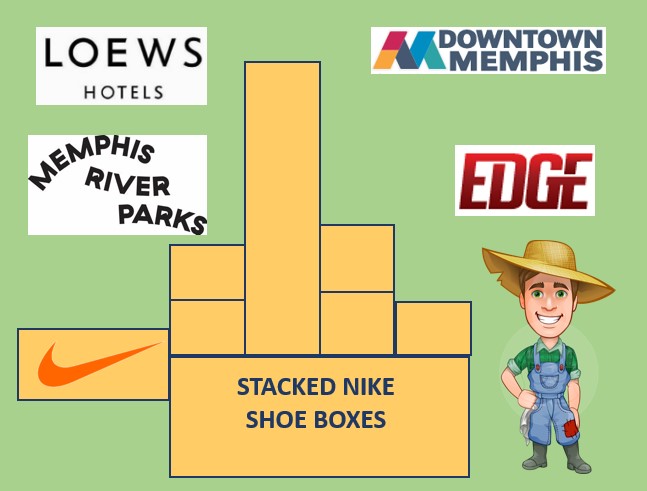 Its stunning how the Downtown Memphis Commission (DMC) would abandon one of their core charges, in eliminating blight, just to work with Loews Hotels. And THM, had to be operating on the assumption that the City and County would not leave the City holding the bag, with the largest piece of blight in Downtown, in the 100 N. Main Building, while sacrificing open space to incentivize a new Loews Hotel with TDZ money and a 30 year $90M PILOT. THM had to think, in addition to the Loews assurances made to them, that local government would look out for the taxpayer. Not in Memphis!

Has anyone ever seen that ugly ass blighted 100 N. Main Building on a national TV shot ? Its disgusting ! And Loews is not the only brand local leaders are blinded by. Nike is another brand that has blindsided everyone with an apparent default on their PILOT. The apparent default is based on Nike’s most recent EDGE PILOT compliance report that revealed lack of proof of 2018 City PILOT payments, no 2019 MWBE spend and almost 1200 low wage workers kicked off subsidized healthcare coverage pre-c0vid.

Meanwhile, there are local brands like EDGE, DMC and Memphis Riverparks Partnership (MRP) that have an accepted brand leading to rubber stamped proposals.

While using taxpayer money and getting local government funding without contract deliverables, MRP is charged with riverfront development. The former occurs as Mud Island is left without a development plan, justified with a $20M deferred maintenance price tag, asserted by MRP. Has anyone ever asked MRP to document the $20M in deferred maintenance ? And if that is not enough, MRP regularly closes Riverfront Drive for public use, making riverfront access more cumbersome for many to include the disabled.

And finally, DMC is planning to bring back Union Row, now The Walk, for a 30 yr PILOT while asking for TDZ funds. When Union Row was last approved, 2 years ago,  it was like, “we gotta hurry and get this done”, preventing in depth study by the County Mayors’ office. With construction never having started, DMC is bringing Union Row, now The Walk, back almost 2 years later for legislative reconsideration.