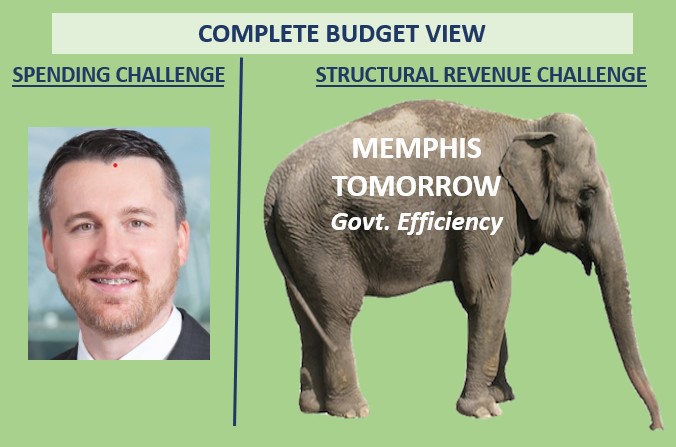 Commissioner Mick Wright’s recent policy blog is recommended reading for taxpayers. Instructive for all, Wright relates, in layman terms, the County budget to the household budget by clearly defining County property tax revenue as income, the County general fund balance as a savings account and County debt as a credit card.

Currently and perhaps unknowingly, both “progressive” and “conservative” Commissioners are following the “government efficiency” policy script of the Memphis Tomorrow public – private complex. The script is that of cutting both public expenditures and tax revenues through excessive and fiscally liberal  economic development incentives. Cutting and managing spending works in budget development, but not alone, in the face of a structural revenue problem.

A structural public revenue problem exists when improving economic conditions will not solve the budget problem.  In Memphis, solving the budget problem requires a policy restructuring that ignores the script of Memphis Tomorrow.

In this way, Commissioners could see that promised economic development, following the Memphis Tomorrow “government efficiency” policy script, is not working for resident taxpayers. This concern was recently revealed in Orange Mound, where falling residential property values got the attention of former County Commissioner and now County Assessor Melvin Burgess.

Correcting years of misdirected  economic development efforts, requires a policy intervention in support of Shelby County taxpayers, while getting the Memphis Tomorrow elephant out of the room. 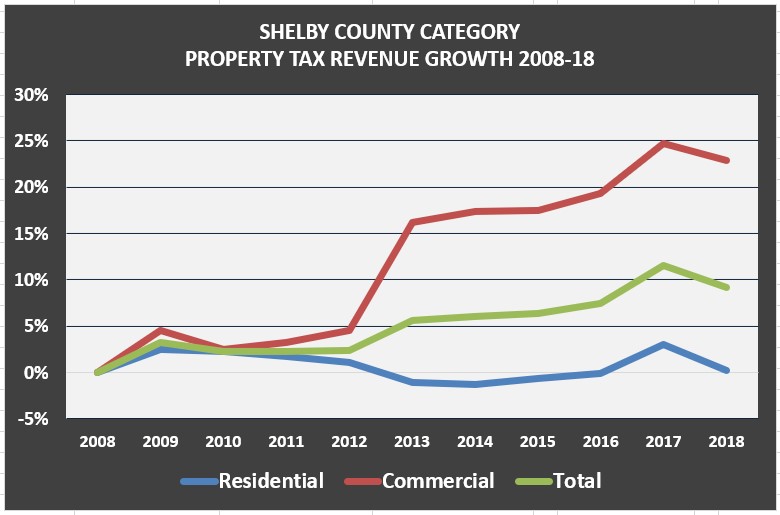 Over a period of 10 years, the above chart reveals, that Shelby County residents are not participating in local economic development, as expressed through increased home values that drive higher property tax revenue. EDGE uses increased residential tax revenue, that occurs from projected wage growth, as part of their justification for abating commercial real estate taxes. But residential property tax revenues are not increasing, while excessive corporate/real estate tax abatements roar for the benefit of the small few.

Residential property tax revenues grew annually at .02% and .2% over 10 years

EDGE and DMC tax abatements, when benchmarked against research and other cities, are $25M per year in excess for County government alone, resulting in an accrued public County policy debt of approximately $300M.

Excessive abatements and economic development, that did not materialize, result in a structural Shelby County revenue problem/shortfall in excess of $50M per year when considering all tax revenue sources beyond just property taxes. The above conclusion is further informed by lagging and below average wage growth and employment growth that stem from disconnected workforce development efforts.

In the end, County budget solutions will need to solve both spending management and structural revenue problems through improved economic development.

After acknowledging both spending and structural revenue challenges, convergent policy and practice solutions, for both progressives and conservatives, are as follows:

Both progressives and conservatives have their roles to play in the current County budget process. There is plenty of work to go around…..